Items related to The Silverado Squatters, An Inland Voyage & Essays... 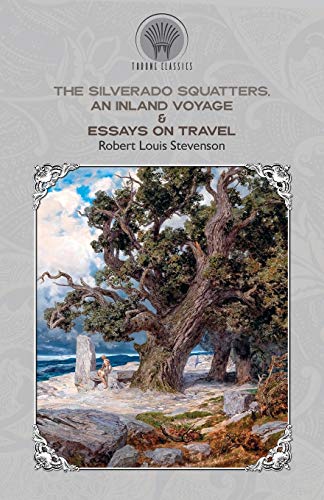 The Silverado Squatters (1883) is Robert Louis Stevenson's travel memoir of his two-month honeymoon trip with Fanny Vandegrift (and her son Lloyd Osbourne) to Napa Valley, California, in 1880.

In July 1879, Stevenson received word that his future American wife's divorce was almost complete, but that she was seriously ill. He left Scotland right away and travelled to meet her in Monterey, California, (his trip detailed in The Amateur Emigrant (1894) and Across the Plains (1892)). Broken financially, suffering from a lifelong fibrinous bronchitis condition, and with his writing career at a dead end, he was nursed back to health by his doctor, his nurse, and his future wife, while living briefly in Monterey, San Francisco, and Oakland. His father having provided money to help, on May 19, 1880, he married the San Francisco native, whom he had first met in France in 1875, soon after the events of An Inland Voyage. Still too weak to undertake the journey back to Scotland, friends suggested Calistoga, in the upper Napa Valley, with its healthy mountain air.

An Inland Voyage (1878) is a travelogue by Robert Louis Stevenson about a canoeing trip through France and Belgium in 1876. It is Stevenson's earliest book and a pioneering work of outdoor literature.