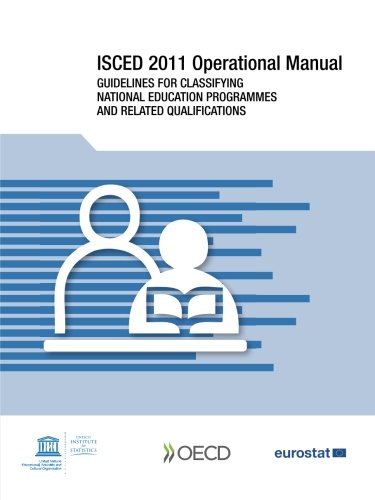 The structure of education systems varies widely between countries. In order to produce internationally comparable education statistics and indicators, it is necessary to have a framework to collect and report data on education programmes with a similar level of educational content. UNESCO's International Standard Classification of Education (ISCED) is the reference classification for organising education programmes and related qualifications by education levels and fields. The basic concepts and definitions of ISCED are intended to be internationally valid and comprehensive of the full range of education systems. ISCED 2011 is the second major revision of this classification (initially developed in the 1970s and first revised in 1997). It was adopted by the UNESCO General Conference in November 2011. Prepared jointly by the UNESCO Institute for Statistics (UIS), the OECD and Eurostat, this operational manual provides guidelines and explanatory notes for the interpretation of the revised classification, by each education level. It also includes country examples of programmes and qualifications that have been classified to ISCED 2011. This manual will be useful for national statisticians collecting and reporting data on education to international organisations, as well as for policymakers and researchers interested in better understanding of these data.