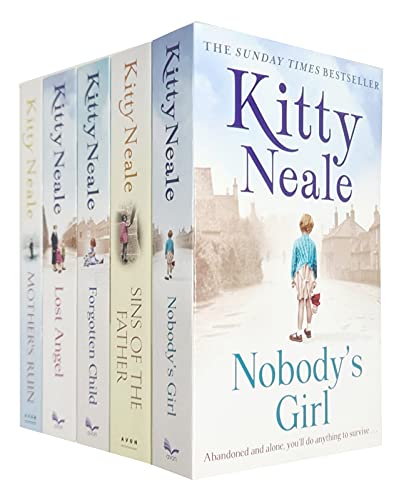 Please Note That The Following Individual Books As Per Original ISBN and Cover Image In this Listing shall be Dispatched Collectively:

Mother's Ruin:
You can't choose your family...When Sally and her family have to move back to Candle Lane to look after her grandmother, the cracks in their family soon begin to show.Another compelling family drama from the Sunday Times bestselling author of Lost Angel and Nobody's Girl.

Nobody's Girl:
Abandoned on the cold stone steps of an orphanage, only a few hours old and clutching the object which was to give her name, Pearl Button had a hard start to life.Now 16 years old, she's finally managed to escape the cruel confines of the orphanage, and enter the real world.

Sins of the Father:
Left to raise eight siblings after her mother's death, 17-year-old Emma Chambers faces a daily battle with hunger and her father's drunken rages.Until she is offered a way out. If she marries landlord Horace Bell - twenty years her senior - Emma can swap abject poverty for comfort.

Lost & Found:
Taunted by everyone around her, including her mother Lily, 15-year-old Mavis Jackson is devastated when her only ally, her father Ron, leaves home to beat his gambling addiction. Forced to walk the streets in search of junk to sell, the future seems bleak.

Forgotten Child:
ALONE...Jennifer Lavender was a lonely child. She always felt like second best and desperately craved her parents love.ADOPTED...When Jenny learns she was adopted everything falls into place.

Lost Angel:
After losing everything in the Blitz, Hilda Stone and her 14-year-old daughter Ellen are desperate for a miracle. But their world is shattered when a telegram informs them that Doug - their beloved husband and father - has been lost at sea.