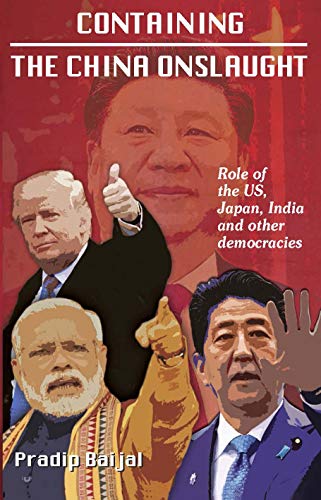 7. Containing the China Onslaught: Role of the US, Japan, India and other Democracies

Book Description Quadrant Infotech (India) Pvt. Ltd, 2019. Hardcover. Condition: New. 1st Edition. Containing The China Onslaught: Role of the US, Japan, India and other democracies is a book with a special relevance today both for the world and India. It provides an insightful look at the miraculous Chinese growth story between 2005 and 2015, presenting hard-hitting facts on how China s GDP has overtaken that of the US, and is currently five times that of India. It unfolds how after being in the same league as India as illustrated in the Goldman Sachs BRIC reports of 2001 and 2005, Deng Xiaoping, the paramount leader of the People s Republic of China and the architect of China s market economy reforms, planned and implemented policies for China s growth. Through archives now available in the public domain, the book reveals how the US and the world s financial institutions aided and abetted this growth. Quoting extensively from widely acclaimed geopolitical observers, researchers, think tanks and academics, the author lays bare the stark reality of why and how an expansionist, feudal and non-democratic China is moving stealthily and surely towards devouring its traditional enemies Japan, India and the US and bringing fruition to its 100-year-old plan of re-gaining its hegemony in the world. The book calls for strong leadership and suggests bold reforms that need to be taken to halt China s stealthy steps towards maritime and land colonization of south Asia through its offers of infrastructural aid to underdeveloped countries. It cautions the western world against the immediate dangers of world institutions being lax on rules and regulations. It urges speedy efforts to override China s near current domination over 5G technology and the consequent access to inner workings of governments. As a way forward, Baijal proposes a coordinated strategy in the present digital/disruptive world for India, Japan and the US which hinges on the three countries working together, as China and the US did between 1960 and 2015. Seller Inventory # 131153