Items related to I am That: Talks with Sri Nisargadatta Maharaj

I am That: Talks with Sri Nisargadatta Maharaj 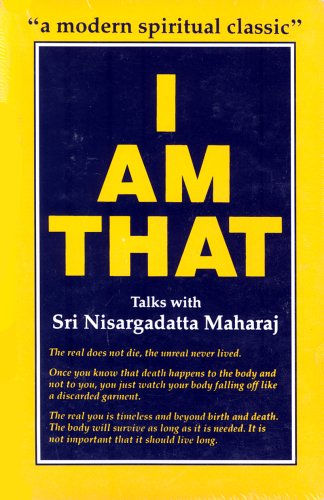 Ever since it was originally published in 1973 "I AM THAT" a modern spiritual classic has run into reprint (Paperback and Hardcover both put together) seventeen times.That is the kind of popularity the book is enjoying.

I Am That is a legacy from a unique teacher who helps the reader to a clearer understanding of himself as he comes to Maharaj,the spiritual teacher, again and again with the age-old questions,"where am I" "who am I" and "whither am I".The listeners were never turned away from the humble abode of Maharaj then and are not turned away now!

This collection of the timeless teachings of one of the greatest sages of India, is a testament to the uniqueness of the seer's life and work. The book (now in its ninth printing) continues to draw new audiences and to enlighten anxious seekers for self-realisation. Sri Nisargadatta Maharaj was a teacher who did not propound any ideology or religion but gently unwrapped the mystery of the self. His message is simple, direct and yet sublime. The book preserves his dialogues with the followers who came from around the world seeking guidance in destroying false identities. The sage's sole concern was with human suffering and the ending of suffering. It was his mission to guide the individual to an understanding of his true nature and the timelessness of being. He taught that mind must recognise and penetrate its own state of being, not 'being this or that, here or there, then or now', but just timeless being. This is a legacy from a unique teacher who helps the reader to a clearer understanding of himself.

I Am That: Talks With Sri Nisargadatta Maharaj (Pb)

I AM THAT: Talks with Sri Nisargadatta Maharaj

I AM THAT: Talks with Sri Nisargadatta Maharaj