Items related to She 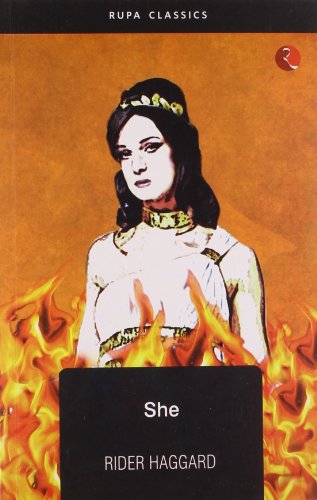 A novel by Henry Rider Haggard, She was first serialized in The Graphic Magazine from October 1886 to January 1887. The story follows the journey of Leo Vincey, and his tutor Horace Holly, to a lost kingdom in the heart of Africa. There, they find a mysterious white goddess, She , or She-who-must-be-obeyed , who believes Leo to be the reincarnation of a long lost love. One of the best-selling books of all time, She is one of the finest examples of nineteenth century imperialist literature.

When it comes to women H. Rider Haggard has the inside track as revealed in this "Show and tell" novel. We see the workings and wonders of the nineteenth century mind. You may also find some interesting attitudes towards the other people in Holly's crew. I have read some different versions of the book and found the Barns & Noble books New York (ISBN 0760752400) to have the best introduction (by Clifton Ganyard) that falls just short of Cliff's Notes in explaining Haggard's background and writings. The illustrations are the same as in the Modern Library version but are clearer and larger. You get to see the writing on a potshard that I have not taken the time to see if it is a real language. Of all the versions I prefer most the recording with narrator Fred Williams; at first he seems to be monotone and out of breath. Then as he approaches the adventure he picks up a bit. By the time he comes to the cliff hanger he is huffing and puffing. He actually has the sound and feel of some old person recalling a long past adventure. His dying friend in the middle of the night visits Holly. He is sworn to secrecy and given a mysterious chest to hold onto and asked to take charge of the friend's son (Leo). When the time came to open the chest and find the contents, the adventure began. I will not relate the story as it is the unfolding that is a good part of the mystery. However if you are expecting an adventure story It is there but there is much more with philosophical discussions of science and society. The story is over way too soon so be sure to get the next book " --By bernie on March 10, 2013

I read this book when I was in grade school and I saw this book again while scrolling Amazon's book section. So I thought I'd read it again. It has and always will be a good story. If one can get past the flowery language and the ye's and thou's, The gist is that when this little boy's father died, he was left a chest that could only be opened when he became 21. In the meantime his guardian followed the dead fathers instructions that this child would be educated and well versed in Arabic, Greek and Latin. After his schooling, they then leave on this quest that is revealed to them when they open the chest. Their jungle adventures are so amazing that if it weren't in a book, they would have never lived. As for the rest of the story, you'll just have to read it yourself --By Amazon Customer on November 30, 2013

Rider Haggard is justly famous for his stories of African adventure, and She, within three months of publication, sold twenty-five thousand copies.