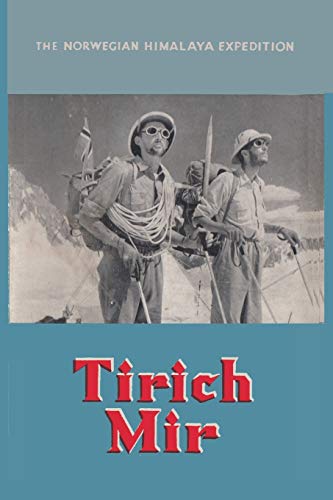 Tirich Mir is by far the highest mountain in the world outside of the Himalayas.

Most Chitralis believe that Tirichmir has never been climbed because of all the witches, demons, genies and fairies who live up there. When ever rumblings are heard from the top of Tirichmir, the locals believe this is because the witches, demons, genies and fairies are getting ready to go to Mecca for the time of Haj. However, contrary to the beliefs of the local people, Tirichmir has been climbed many times. This book is about the first successful assault on Tirichmir.

This mountain was first climbed on 21 July 1950 by a Norwegian expedition consisting of Arne Næss, P. Kvernberg, H. Berg, and Tony Streather.

Tirich Mir is the story of seven young Norwegians' ascent of one of the world's highest, most inaccessible and hitherto unconquered mountain peaks, an exploit which has attracted attention and admiration in all countries. The book was written by those who made this dangerous and victorious journey to the giant Hindukush Mountain and it thus gives the first complete and authentic account of the expedition.

“No other sport demands so many noble human qualities as mountaineering. Not only courage willpower and physical fitness but also the capacity of planning , the knowledge of mountains and all their varying conditions, sober evaluations of chances and dangers, and above everything else a team spirit and comradeship that may be put to the test more severely than in any other sport. The greatest form of moral courage to turn back, perhaps almost at the summit if necessary. . . . “

It is to this magnificent spirit of high adventure that Tirich Mir bears witness.