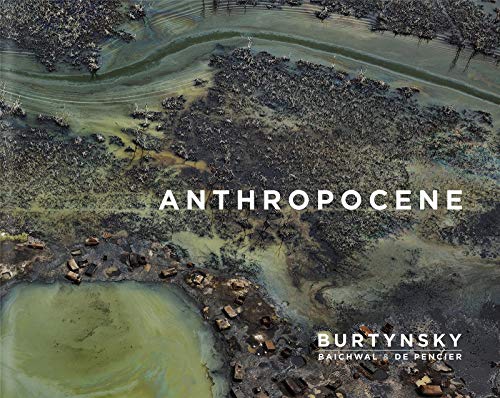 Anthropocene is the newest book by Edward Burtynsky to document human destruction of the earth on a geological scale. In photos as beautiful as they are disconcerting, Burtynsky explores issues such as extinction (large-scale burning of elephant tusks to disrupt illegal trade and the black market, the plight of the last white rhino), technofossils (Nigerian landfi ll sites entirely of plastic, massive concrete tetrapods to protect Chinese coastline from erosion), and terraforming (mines and industrial agriculture). Conta ining specially commissioned poems by Margaret Atwood published here for the fi rst time, a statement by Burtynsky and a range of essays, Anthropocene presents compelling artistic and scientifi c responses to these urgent topics.

The book is one part of the larger Anthropocene project, a multi-disciplinary body of work with fi lmmakers Jennifer Baichwal and Nick de Pencier which includes a major traveling exhibition, documentary fi lm and interactive website. Its starting point is the research of the Anthropocene Working Group, an international body of scientists advocating to change the name of our present geological epoch, Holocene, to Anthropocene the period where human activity dominates climate and environmental change. Including images of the video components and augmented reality experiences from the exhibition, the book, like the overall project, combines traditional and new lens-based media in an innovative and dynamic expression of humanity s profound and lasting changes on the planet.

The book is a journey across 20 countries that explores humanity's devastating effects on nature, from technofossils and urbanization to deforestation, resource depletion and biodiversity loss. Each image reveals, to use Walter Benjamin's term, the "optical unconscious" of our era: concrete seawalls and mammoth river dams of China, floating city slums of Nigeria, Chile's lithium and copper mines, log booms in Canada, hyperscale greenhouses of Spain, marble quarries of Italy, nuclear power stations and petrochemical plants in the U.S. and global mega-cities.--Lev Feigin "Hyperallergic "

Anthropocene warns us, beautifully and eerily, that we may already be on the way [to the end of the human race].--Flaunt Magazine

The power of Edward Burtynsky's landscape photographs is undeniable... These exhilarating portrayals of civilization's ecological self-estrangement are not quite the images we need, but they are the ones we deserve.--Louis Bury "Hyperallergic "

For photographer Edward Burtynsky, his aerial takes of landscapes, [...] are a way to show how humans have reshaped the planet.--Dusica Sue Malesevic "Daily Mail "

Book Description Hardcover. Condition: New. Hardcover. Anthropocene is the newest book by Edward Burtynsky to document human destruction of the earth on a geological scale. In photos as beautiful as they are disconcerting, Burtynsky explore.Shipping may be from multiple locations in the US or from the UK, depending on stock availability. 224 pages. 2.928. Seller Inventory # 9783958294899