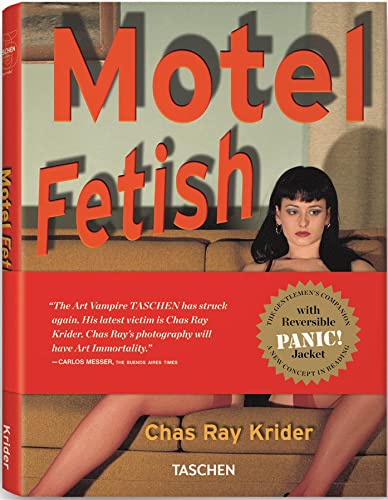 Behind closed doors. Lustful places, luscious women. A number of years ago I began to see distinctive layouts in "Hustler's Leg World" that got me nervous. The photographs were that good. Whoever it was had style and made the women his women. Krider women. Women I began to desire on a monthly basis. In the world of professional golf there is an expression "the world's greatest golfer not to win a major tournament." Chas Ray Krider was the world's greatest erotic photographer not to have a book. Thanks to TASCHEN we now have over 160 Krider images to pore over. To salivate over. Like a good film noir, he takes us to lustful places. Is it a crime scene or a sea of lust? These beautiful, languid women wait for whom? For me. For you. They play the "waiting game" beautifully. An ass in the air, a pair of crossed legs in nylons, all bathed in warm tones. A still life unstuck in time. So this is what goes on behind closed doors? Oh, I almost forgot. Alongside these many Midwest femme fatales is Dita, raven-haired icon. Not since Betty Page has a woman fleshed out so correctly a vintage girdle and bra ensemble. Enjoy. He takes you places where you only vaguely think you have been. Eric Kroll, editor and pupil.

Eric Kroll edited several titles for TASCHEN including Natacha Merritt's Digital Diaries and The Wonderful World of Bill Ward. His photography was the subject of TASCHEN's Fetish Girls and Beauty Parade.