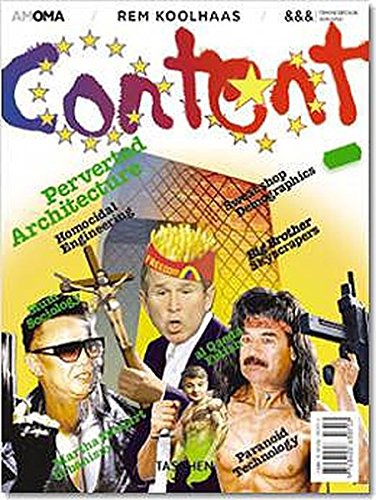 This book takes place at the cusp of the 20th and 21st centuries, in the pre- and post-September 11th world. It is a singular product of its time, packed full of words and images portraying the architectural projects and metaphysical mechanics that have defined Rem Koolhas's OMA-AMO firm over the past seven years. In the format of a small, thick magazine, this "book" is more of an anti-book, an informal tribute the ephemeral world we inhabit. Focusing on the theme "Go East," this visual journey follows OMA-AMO from San Francisco to Tokyo, traversing our massive and turbulent planet in search of "an opportunity to realize the visions that make remaining at home torturous."

"Content is a follow-up to SMLXL, an inventory of seven years of OMA's tireless labor. In many ways it is structured according to what its predecessor is not - dense, cheap, disposable..." - Brendan McGetrick, Editor"

Brendan McGetrick is a writer and editor from the United States. Before starting Content, he collaborated with Rem Koolhaas and AMO on a special issue of Wired magazine. He is a regular contributor to a few magazines, and is currently working on a new book about record collecting. Rem Koolhaas