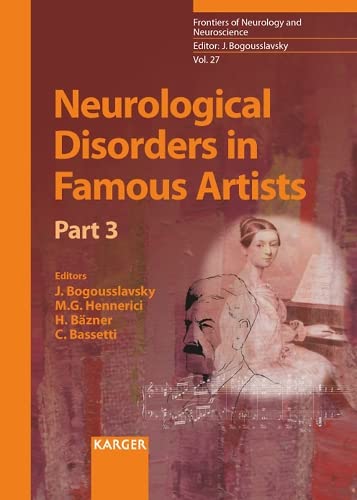 The third part of Neurological Disorders in Famous Artists presents painters, musicians, and writers who had to fight against an acute or chronic neurological disease. Sometimes this fight was without success (e.g. Shostakovich, Schumann, Wolf, Pascal), but often a dynamic and paradoxical creativity of the clinical disorder was integrated into their artistic production (e.g. Klee, Ramuz). Occasionally, some even wrote the first report of a medical condition they observed in themselves, like Stendhal who made a detailed report of aphasic transient ischemic attacks before dying of stroke shortly thereafter. In rarer instances, a neurological disease was inaccurately attributed to an artist in order to explain certain features of his work (de Chirico, Schiele). Some chapters in this publication focus on neurological conditions reported in artistic work, including descriptions by Shakespeare and Dumas. Bringing new light to both artists and neurological conditions, this book serves as a valuable and entertaining read for neurologists, psychiatrists, physicians, and anybody interested in arts, literature and music.

Buy Used
Condition: As New
Like New. Ships from multiple locations Learn more about this copy

Book Description Condition: Good. A+ Customer service! Satisfaction Guaranteed! Book is in Used-Good condition. Pages and cover are clean and intact. Used items may not include supplementary materials such as CDs or access codes. May show signs of minor shelf wear and contain limited notes and highlighting. Seller Inventory # 3805593309-2-4