Items related to The Watch: A Twentieth-Century Style History

The Watch: A Twentieth-Century Style History 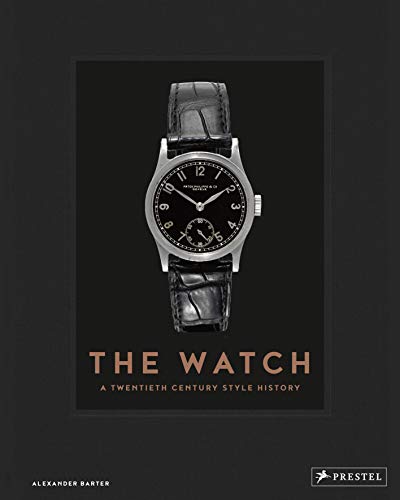 Offering the perfect blend of high-quality imagery and impeccable research, this magnificent book takes readers through the twentieth century to show how the watch, in all its forms, evolved. It charts the early rise of the wristwatch, shows how the cataclysmic events of the 1929 Wall Street Crash unexpectedly led to a golden age of watch production, and demonstrates how the electronic watch, which almost destroyed the traditional industry, led to a mechanical watch renaissance in the last two decades of the 20th century. Each decade opens with an introduction to the era's stylistic and design highlights and then examines the development of specific genres of watches within each period. Hundreds of colour photographs in this book feature full page close ups that reveal intricate details of form, texture and design. Author Alexander Barter's vast knowledge of the 20th-century watch informs his texts which discuss the major technological and design breakthroughs in a chronological format. This book also includes vintage advertisements and other promotional materials, helping to give a sense of the eras in which they were created. The perfect gift for watch aficionados, this beautiful and informative volume presents the world's finest watches with an elegance and depth befitting its subject.

"More than a visual treat, author Alexander Barter backs up the horological eye candy with insight and substantive context...A great gift for watch fans or as a classy coffee table appointment." -Gear Patrol

ALEXANDER BARTER spent more than a decade at Sotheby's watch division, becoming its Deputy Worldwide Head in 2005. In 2009 he founded his own company, Black Bough. He is a member of the Antiquarian Horological Society and is a Freeman of the Worshipful Company of Clockmakers, the oldest surviving horological institution in the world.

Book Description Hardcover. Condition: New. Hardcover. Discover the stylistic evolution of the watch in this unparalleled guide to the greatest timepieces of the 20th century. Offering the perfect blend of high-quality imagery and impeccable .Shipping may be from multiple locations in the US or from the UK, depending on stock availability. 336 pages. 2.436. Seller Inventory # 9783791385068

8. The Watch: A Twentieth-Century Style History