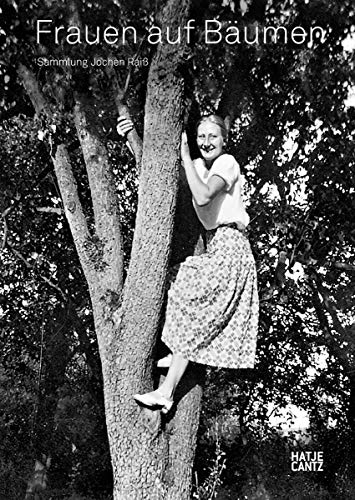 “You know, I don’t know how one can walk by a tree and not be happy at the sight of it?” writes Fyodor Dostoyevsky in The Idiot. Perhaps this sentence could also be used to explain the theme of women in trees that was so popular between the twenties and fifties and has, until now, never before been assembled in a book. The enthusiastic collector, Jochen Raiß, discovered this subject during his flea market excursions. He pulled black-and-white photographs out of boxes in which he found numerous snapshots of other’s lives wildly thrown together. They feature young women at dizzying heights who, at times, smile into the camera as if they were in love. The publication assembles the finds from this charming genre that Raiß compiled over a period of twenty-five years. Whether cheerfully dangling their legs, casually nestling in the forks of branches, or athletically climbing to the treetop―each picture has its very own story to discover. A book full of nostalgia.

...all these women, nearly a century ago, sitting in trees like the boys they never were are riveting.--Idra Novey "The Paris Review "

The very best [photographs] are those where the knowledge that she is doing something mischievous is written all over the climber's face. She is giddy with it. Who knows what became of these women? But I like to think that, even if they were fettered by propriety every other day of their lives, just this once, they felt free.--Lucy Davies "The Telegraph "

It all began at a flea market in Frankfurt, when photo collector Jochen Raib came across a picture of a woman wearing a summer dress and high heels. While she looked ready for a Sunday stroll, her delicate footwear was odd for what her photographer caught her in the midst of doing: climbing a tree....he has since amassed 91 such photographs, now collected in an endearing photo book simply titled Women in Trees--Thomas Voon "Hyperallergic "

Book Description Hatje Cantz, 2016. Hardcover. Condition: New. Hardcover. You know, I don't know how one can walk by a tree and not be happy at the sight of it? writes Fyodor Dostoyevsky in The Idiot. Perhaps this sentence could also be used to explain the theme.Shipping may be from multiple locations in the US or from the UK, depending on stock availability. 112 pages. 0.181. Seller Inventory # 9783775741675