Items related to "I am but shadow of myself" - English Common...

Selden, Deborah "I am but shadow of myself" - English Common Law and Legal Identity in Shakespeare's 1 Henry 6 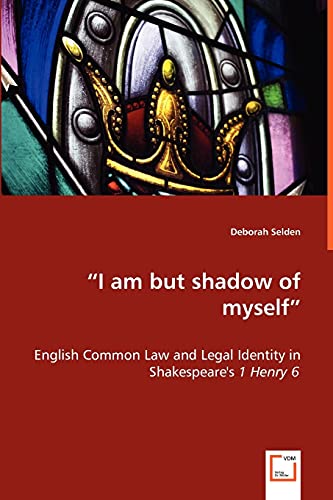 From the death of the last great medieval monarch, Henry V, until the ascendancy of Henry Tudor as Henry VII, England underwent a long and bloody transition from feudal kingdom to early modern state. Shakespeare's minor tetralogy is the story of this metamorphosis and 1 Henry VI is its beginning chapter. The language and action of 1 Henry VI reflect the legal foundations of feudal England at the point when those underpinnings were beginning to disintegrate. This dissolution is represented through four subplots that emphasize the characters as personae mixtae - private individuals and legal entities - within feudal England's socio-political structure. This study is the first of its kind to analyze Shakespeare's English history plays in terms of medieval and early modern theories of jurisprudence. Exploring how and why Shakespeare deviated from his historical source materials, this work focuses on 1 Henry VI's unhistorical scenes and examines details of characterization, dialogue and diction in context of legal and political works that would have been familiar to most educated Elizabethans.

I am but shadow of myself": English Common Law and Legal Identity in Shakespeare's 1 Henry 6

I am but shadow of myself"