Items related to Mastering Your PhD: Survival and Success in the Doctoral...

Gosling, Patricia A. Mastering Your PhD: Survival and Success in the Doctoral Years and Beyond

Mastering Your PhD: Survival and Success in the Doctoral Years and Beyond 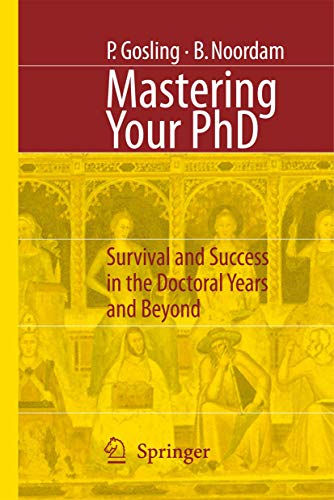 "Mastering your PhD" helps guide PhD students through their graduate student days. Filled with practical advice on getting started, communicating with your supervisor, staying the course, and planning for the future, this book is a handy guide for graduate students who need that extra bit of help getting started and making it through. Every year, thousands of students around the world embark on the long and difficult journey toward a PhD. Some of these students will make it through their program with flying colors. Others will experience difficulty getting to the end: some will sink and some will manage to swim barely. The doctoral years can be daunting. While mainly directed to PhD students in the sciences, the book's scope is broad enough to encompass the obstacles and hurdles that almost all PhD students face at some point in their doctoral training. Who should read this book? Students of the physical and life sciences, computer science, math, and medicine thinking about entering a PhD program, doctoral students at the beginning of their research and any graduate student who is feeling frustrated and stuck. It s never too early or too late! "A must for any student in natural science who is doing or is considering doing a PhD. Also, I strongly recommend PhD supervisors to read this book they will learn a lot." Henrik Stapelfeldt, Professor of Chemistry, Arhus Denmark "At last, a book about graduate study that paints the big picture and that recognizes PhD work as a real job involving many of the same relationship and business issues that will be important to students throughout their careers. Outstanding!" Lou Bloomfield, Professor of Physics, University of Virginia, USA

"It focuses on the non-scientific aspects of academic life and the PhD process, discussing issues which often are neglected ... . the book really shines in the discussion of human relations issues, such as how to communicate effectively with people different from yourself ... . Their suggestions on time management, planning and self-regulation are particularly useful: people who acquired their PhD years ago may also profit ... . Mastering your PhD can be recommended to any student considering graduate school ... ." --Sarah Boslaugh, MathDL-online, October, 2006

"The book is easy to read and is split into nineteen short chapters ... . Most chapters have their main points highlighted by examples, describing a team of students restoring a piece of artwork, for instance, which tend to be useful. ... I would also recommend the book as a useful guide for prospective PhD students who are not sure of what a PhD actually entails, and what is expected of you as a student ... ." --Sarah Casewell, The Observatory, Vol. 127 (1199), 2007

Prof. Dr. Bart Noordam (1964) obtained his PhD degree in Physics (cum laude) at the University of Amsterdam, the Netherlands. After a brief stint as a Postdoc in the USA, he headed up a research group at the FOM-Institute for Atomic and Molecular Physics (AMOLF) in Amsterdam. There he studied the ultra-fast interactions between light and atoms. Prof. Noordam has supervised 9 PhD students and published over 120 scientific papers. He interrupted his academic career for two years to work as a management consultant at McKinsey & Company, and returned to AMOLF in the fall of 2002 as director of the institute. Bart Noordam gives short courses for graduate students to get the most out of their PhD. The enthusiast response over a training course he gave for EURODOC triggered the ideas behind this book (EURODOC is the European convention of the representatives of the national PhD student unions). Patricia Gosling (1963) obtained her Bachelor of Arts in Biochemistry and English Literature from Northwestern University, USA. After a 3-year period working as a research assistant in neurophysiology at Stanford University, she re-located to the Netherlands where she received her PhD in Organic Chemistry at the University of Nijmegen. From 1996-2002 she ran her own communications company, with a focus on scientific journalism and teaching writing and presentation skills to graduate students of Environmental Science. From 2003-2004 she was employed as a medical writer with Excerpta Medica (a division of Elsevier). She has also translated and edited numerous books and documents for the industrial and academic communities. A US native, Dr. Gosling has lived and worked in the Netherlands, Morocco, and France. Currently employed as Research Manager at the European Neuromuscular Centre in the Netherlands, she is the author of two guidebooks (Ethnic Amsterdam, Vassallucci, 2002 and The Lovers Guide to Amsterdam, Vassallucci, 2003). Fluent in Dutch and French and an enthusiastic student of Arabic, Dr. Gosling has chosen to follow a non-traditional post-PhD career path that has proved to be both eclectic and rewarding.

3. Mastering Your PhD: Survival and Success in the Doctoral Years and Beyond