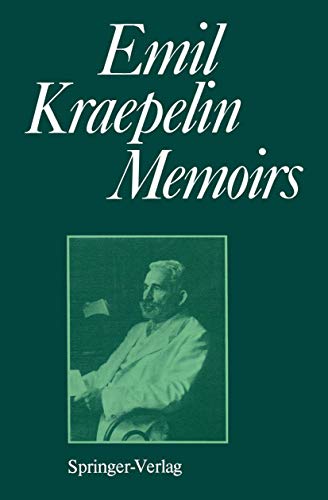 When Emil Kraepelin died (15. 02. 1856-07. 10. 1926), he left behind his memoirs, which were not published until today. Co-workers and col­ leagues from the last years of Kraepelin's life and his family knew that such an autobiography existed, but they were not sure whether these memoirs should be made public, so they remained unpublished. At a commemoration 50 years after Emil Kraepelin's death in Mu­ nich (1976) the descendants, who attended the festivities, agreed to the editors' suggestion to publish the "Memoirs". Through this publication we have been able to learn more about the life of a man, whose work has had a decisive and lasting effect on the entire psychiatry since the end of the last century. When one reads the memoirs, one has to admit that on­ ly very little is known about this great psychiatrist's personality and path through life and that this gap has by no means been filled by the publica­ tion of his memoirs. Perhaps this publication will encourage work on a biography, which will give us more information on Kraepelin's person­ ality, life and scientific work. The focal-point of Kraepelin's work lies in the classification of psy­ chiatric clinical syndromes, which was developed from clinical observa­ tions, was constantly tested empirically and was altered taking new findings and knowledge into account. However, the basis of this system has remained unchanged and valid until today.

Book Description Springer, 1987. Condition: Good. A+ Customer service! Satisfaction Guaranteed! Book is in Used-Good condition. Pages and cover are clean and intact. Used items may not include supplementary materials such as CDs or access codes. May show signs of minor shelf wear and contain limited notes and highlighting. Seller Inventory # 3540175806-2-4