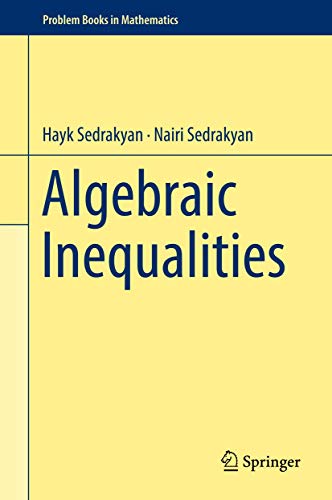 This unique collection of new and classical problems provides full coverage of algebraic inequalities. Many of the exercises are presented with detailed author-prepared-solutions, developing creativity and an arsenal of new approaches for solving mathematical problems. Algebraic Inequalities can be considered a continuation of the book Geometric Inequalities: Methods of Proving by the authors.

This book can serve teachers, high-school students, and mathematical competitors. It may also be used as supplemental reading, providing readers with new and classical methods for proving algebraic inequalities.

Hayk Sedrakyan is an IMO medal winner, Professor of Mathematics in Paris, France and a professional Math Olympiad Coach in Greater Boston area, Massachusetts, USA. He has defended his PhD thesis in mathematics at UPMC-Sorbonne University, Paris, France. Hayk is a Doctor of Mathematical Sciences in the United States, France and Armenia. He has received three Master’s degrees in mathematics from Germany, Austria, Armenia and has spent a small part of his PhD studies in Italy. Hayk has authored several books on the topic of problem solving and Olympiad style mathematics published globally.