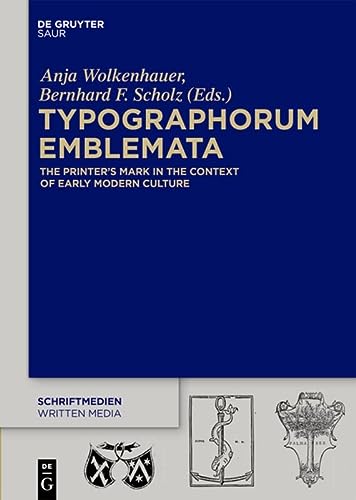 5. Typographorum Emblemata: The Printer's Mark in the Context of Early Modern Culture (Hardback)

Book Description Hardback. Condition: New. Language: English. Brand new Book. This collection of specially commissioned articles aims to shed light on the Early Modern printer's mark, a very productive Early Modern word-image so far only occasionally noted outside the domain of book history. This collection of 17 specially commissioned articles aims to shed light on the European printer's mark, a very productive Early Modern word-image genre so far only occasionally noted outside the domain of book history. It does so from the perspectives of book history, literary history, especially emblem scholarship, and art history. The various contributions to the volume address issues such as those of the adoption of printer's devices in the place of the older heraldic printer's marks as a symptom of the changing self-image of the representatives of the Early Modern printing profession, of the mutual influence of emblems and printer's marks, of the place of Classical learning in the design of Humanist printer's marks, of the economic factors involved in the evolution of Early Modern printer's marks, the pictorial topics of the Early Modern printer's mark, and the printer's mark as a result of the 'Verburgerlichung' of the device of Early Modern nobility. Special care was taken to account for the similarities and differences of the printer's marks produced and used in different regional and cultural contexts. The printer's mark thus becomes visible as a European phenomenon that invites studying some of the most significant shared aspects of Early Modern culture. Preface/ Beginnings and Provenances: A. Wolkenhauer: Sisters, or Mother and Daughter? The Relationship between Printer's Marks and Emblems during the First Hundred Years/ A. Bassler: Ekphrasis and Printer's Signets/ L. Houwen: Beastly Devices: Early Printers' Marks and Their Medieval Origins/ H. Meeus: From Nameplate to Emblem. The Evolution of the Printer's Device in the Southern Low Countries up to 1600/ Regions and Places: K. Sp. Staikos: Heraldic and Symbolic Printer's Devices of Greek Printers in Italy (15th-16th century)/ A. Jakimyszyn-Gadocha: Jewish Printers' Marks from Poland (16th-17th centuries)/ J. A. Tomicka: Fama typographica. In Search of the Emblem Form of Printer's Devices. The Iconography and Emblem Form of Printer's Devices in 16th- and 17th-Century Poland/ P. Hoftijzer: Pallas Nostra Salus. Early-Modern Printer's Marks in Leiden as Expressions of Professional and Personal Identity/ D. Peil: Early Modern Munich Printer's Marks (and Related Issues)/ K. Lundblad: The Printer's Mark in Early Modern Sweden/ S. Hufnagel: Iceland's Lack of Printer's Devices: Filling a Functional and Spatial Void in Printed Books during the Sixteenth Century/ Concepts, Historical and Systematic: B.F. Scholz: The Truth of Printer's Marks: Andrea Alciato On 'Aldo's Anchor', 'Froben's Dove' and 'Calvo's Elephant'. A Closer Look at Alciato's Concept of the Printer's Mark./ V. Hayaert: The Legal Significance and Humanist Ethos of Printers' Insignia/ J. Kilianczyk-Zieba: The Transition of the Printer's Device from a Sign of Identification to a Symbol of Aspirations and Beliefs/ Judit Vizkelety-Ecsedy: Mottos in Printers' Devices - Thoughts about the Hungarian Usage/ M. Simon: European Printers' and Publishers' Marks in the 18th Century. The Three C's: Conformity, Continuity and Change/ B.F. Scholz: In Place of an Afterword: Notes on Ordering the Corpus of the Early Modern Printer's Mark/ Research Bibliography: The Early Modern Printer's Mark in its Cultural Contexts/ Index (Names, Places, Motti). Seller Inventory # APC9783110439199