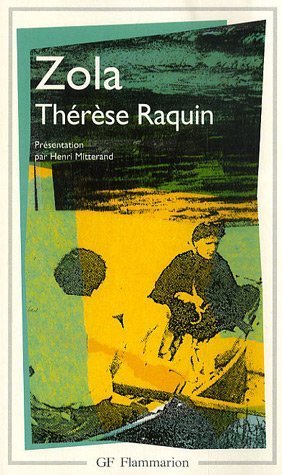 Thérčse Raquin is a novel by Émile Zola, first published in 1867. It was originally published in serial format in the journal L'Artiste. It was published in book format in December of the same year. In 1873, Zola turned Thérčse Raquin into a play. Thérčse Raquin tells the story of a young woman, unhappily married to her first cousin by a well-intentioned and overbearing aunt. Her cousin, Camille, is sickly and selfish, and when the opportunity arises, Thérčse enters into a tragic affair with one of Camille's friends, Laurent. In his preface, Zola explains that his goal in this novel was to "study temperaments and not characters" and he compares the novel to a scientific study. Because of this detached and scientific approach, Thérčse Raquin is considered an example of Naturalism.

'Therese Raquin' is a clinically observed, sinister tale of adultery and murder among the lower orders in nineteenth-century Paris. Zola's dispassionate dissection of the motivations of his characters, mere 'human beasts' who kill in order to satisfy their lust, is much more than an atmospheric Second Empire period-piece. 'Therese Raquin' stands as a key early manifesto of the French Naturalist movement, of which Zola was the founding father. Even today, this novel has lost none of its power to shock.