Items related to What Can We Hope For?: Dialogues about the Future

Polkinghorne, John; Miles, Patrick What Can We Hope For?: Dialogues about the Future

What Can We Hope For?: Dialogues about the Future 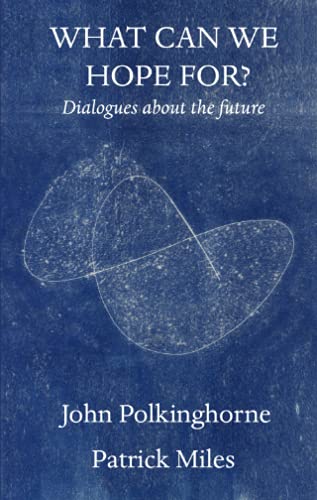 If the Universe is going to end in collapse and decay, as cosmologists tell us, what could be the point of it all? Our own lives seem to have great individual significance, so why do they end apparently in annihilation? These are vital questions for us all. In this book scientist-theologian John Polkinghorne discusses with his friend Patrick Miles why he believes that we can take science's view of the future seriously, yet not dispute the idea that the world is a divine creation.

The subject of 'last or final matters', such as the end of the Universe and human death, is technically known as 'eschatology'. But this short book, expressed in lively, spoken language, is not a technical consideration of eschatology, it presents John Polkinghorne's thinking in an accessible form akin to his bestseller QUANTUM THEORY: A VERY SHORT INTRODUCTION (2002). In the course of a year, Patrick Miles discussed with Polkinghorne his full-length books on eschatology, then together they compressed the transcripts into five chapters.

These are entitled 'The Death of the Universe', 'Is Eschatology Necessary?', 'Hope's Seed', 'Death Is Real', and 'A New Universe'. They tackle head-on traditional religious notions of the End of the World, the apparent finality of death, Christ's utterances about it, the difference between resuscitation and resurrection, Polkinghorne's view of the soul as an 'information-bearing pattern...which will be held in God's memory until our resurrection', and the notion of a new creation for the Universe too. But the book also touches on a vast range of subjects of interest to the common reader, from bereavement and forgiveness to music and an afterlife for animals.

'John Polkinghorne is the unquestioned leader in the field of science and religion, and by a considerable margin its most intellectually credible thinker', writes physicist Karl Giberson. Polkinghorne is a Fellow of the Royal Society and was Professor of Mathematical Physics at Cambridge University from 1968 to 1979, after which he trained for the Anglican ministry and became vicar of Blean in Kent. He served as Canon Theologian of Liverpool Cathedral from 1994 to 2005. In 2002 he was awarded the Templeton Prize for 'an exceptional contribution to affirming life's spiritual dimension'. He was born in 1930 and is the author of over thirty books. His co-author Patrick Miles is a Russianist with an interest in philosophy and religion who has been a Senior Research Associate at Cambridge University.