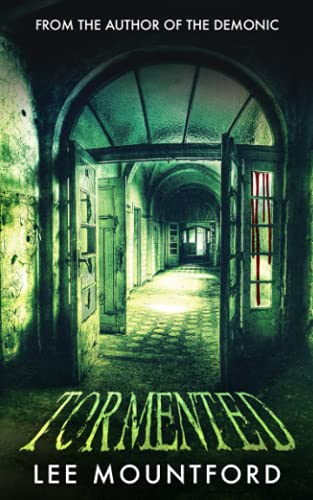 WELCOME TO ARLINGTON ASYLUM, A PLACE WHERE THE INSANE AND THE FORGOTTEN ARE BROUGHT TO DIE Adrian James is running from his past with nothing left to live for. At rock bottom, with a blade to his wrist, a mysterious stranger intervenes and offers him a chance at salvation. Adrian accepts, and he enters Arlington Asylum of his own free will. Once inside, however, he soon learns that he will never escape. And worse, there are strange experiments taking place here, and a secretive medicine is being administered, one that causes certain... changes... in the patients. The insidious secrets within the halls of Arlington Asylum are slowly revealed, and it is beyond anything Adrian could have possibly imagined. A literal hell is unleashed as impossible and terrifying creatures indulge their sadistic desires. Adrian and his friends must escape this nightmarish place and warn the outside world before it’s too late, but they must face down the demons of hell to do so. TORMENTED is a gruesome and violent horror story, influenced by such greats as John Carpenter’s THE THING, Clive Barker’s HELLRAISER, and Jeremy Gillespie’s THE VOID. Do you dare enter the Asylum?

Lee Mountford is a horror author from the North-East of England. His first book, Horror in the Woods, was published in May 2017 to fantastic reviews, and his follow-up book, The Demonic, achieved Best Seller status in both Occult Horror and British Horror categories on Amazon. He is a lifelong horror fan, much to the dismay of his amazing wife, Michelle, and his work is available in ebook, print and audiobook formats. In August 2017 he and his wife welcomed their beautiful daughter, Ella, into the world. Michelle is hoping she doesn’t inherit her father’s love of horror, but Lee has other ideas... You can find him at: Website: www.leemountford.com Facebook: www.facebook.com/LeeMountfordAuthor/ Twitter: @LeeMountford01 Go to his website to get two FREE 10K short stories.