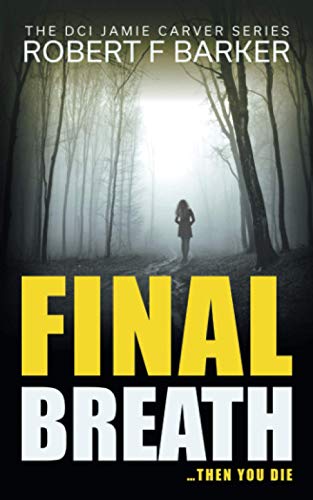 Eighteen months on from the case that nearly cost him his life, only DCI Jamie Carver knows the incredible extent of the Worshipper Killer’s network of depravity – and the storm that will hit when others learn of it. They include those who walk Whitehall's corridors of power, as well as others in high office, and even, maybe, the upper echelons of the Police Service itself. When former members of that network start dying, Carver suspects that someone is out to make sure that their involvement at least, remains hidden -and will stop at nothing to do so. Needing information, fast , but right now chained to a desk, his only recourse is the person who, after last time, he vowed to never have contact with again – the extraordinary and dangerously-seductive dominatrix, Megan Crane.

The second in the DCI Jamie Carver Series, and Book Two of The Worshipper Trilogy, FINAL BREATH is a breathtakingly compelling story of intrigue, conspiracy, and brutal, bloody murder – one in which Jamie Carver finds himself up against people in high places, while forced to renew his acquaintance with the woman who, despite all his efforts, he cannot stop from haunting his dreams.

Born in Liverpool, England, Robert F Barker served thirty years as a police officer and detective, most of it working in and around some of the Northwest's grittiest towns and cities. He likes to write stories that are dark and edgy, but credible enough for the reader to believe they may be based on some sort of reality, which of course they often are. (Names changed to protect the innocent.. etc.). As a police officer, he learned that no matter where people live, whatever their position, they are never far from places where darkness dwells, be they inner city sink estates where drugs are dealt and violence rules, or leafy suburbs where neat gardens and lace curtains conceal the sort of evil that no one ever imagines, until the worst happens. As a former Senior Investigating Officer and Firearms Incident Commander, he knows all about the pressures police officers face, as well as what it means to have to make life-and-death decisions in the heat of live operations. Given his background and experience, his stories are as authentic a portrayal of crime and policing as can be found anywhere in the modern crime genre. He splits his writing-time between his family home in Cheshire, and the beautiful island of Cyprus, where he gains inspiration for a series of Cyprus-based thrillers which he intends will compliment his UK novels.