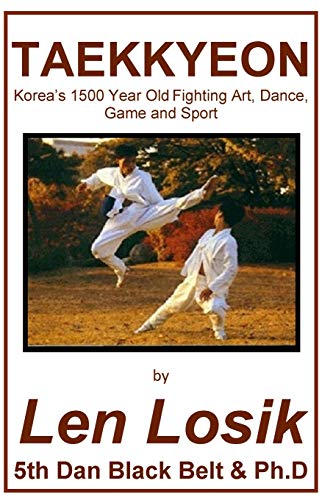 Book Description Createspace Independent Publishing Platform, United States, 2017. Paperback. Condition: New. Language: English. Brand new Book. Taekkyeon is an authentic and completely Korean fighting art (often confused as a martial art) that was developed by the people on the Korean peninsula 1500 years ago when the Tang military assisted and remained in the Silla Kingdom in the 5th century. Taekkyeon players did not adopted the word "Do" because the word "Do" was from the Japanese who added the sophisticated, philosophical aspects of Bushido to Okinawa's Karate and without the addition of the word "Do" to Taekkyeon, Taekkyeon instructors did not purport to improve the personal growth of Taekkyeon players as is done in styles of martial arts that have added the word "Do" to their martial art keeping Taekkyeon as a modern day fighting art and purely Korean in all aspects and not a martial art. Before the 5th century, Taekkyeon was practiced by the ruling classes and from the 9th to 12th century, became very popular, even among the common people. According to a Korean history book written in the 15th century, Taekkyeon was widely encouraged and practiced by everyone from the King himself to locals. This interest continued until the early Chosan Dynasty. But as the society moved toward a system that encouraged education and literary pursuits and discouraged military pursuits, the practice of Taekkyeon declined. By the 14 century, Taekkyeon was considered a folk dance rather than a fighting art. During the Japanese colonial period, Taekkyeon was banned and nearly vanished. Fortunately Song Duk-ki (1893-1987) the only known player of Taekkyeon in the 19th and 20th centuries as a student, player and referee and through his work, preserved the art and handed it down to modern day players. After the independence of Korea, the practice of Taekkyeon became considerably less popular than the many new Korean martial arts styles with their focus on student growth and personal development rather than becoming a better fighter. The establishment of Taekwondo after the Korean War and its subsequent popularity as an Olympic sport with direct ties to taekkyeon for many of its more demanding technques served to further overshadow the practice of Taekkyeon. Today's Tekkyeon players execute amazing precision and complex techniques that are unrivaled in both the fighting arts and martial arts. Taekkyeon began to rise in popularity again in the early 1980s. It was designated by the Korean government and UNESCO as Important Intangible Cultural Asset No. 76 on June 1, 1983 owing to the extensive efforts by Shin Han-seung (1928-1987), who learned Taekkyeon from Song Duk-ki. After the death of both masters, Lee Yong-bok, who learned Taekkyon from these two masters in 1984, established the Korea Traditional Taekkyon Institute to revive Taekkyon. Through his efforts, a resurgence in Taekkyeon practice resulted and on June 30, 1985, the first Taekkyeon game in 80 years took place in Kooduk stadium, Pusan. The author has included a year by year history of events that caused the colonization of Korea, the reason for the decline in interest in everything Korean and the development of modern Taekkyeon using modern techniques and many dozens of photos for learning the new techniques and those used in the new Yondan Shippal Soo (4th Dan 8 Hnads) Hyung/Form that was added to reduce the likelihood of Taekkyeon being lost again. The author includes a huge Taekkyeon modern terminology in English, Hangul and Sino-Chinese, an exhaustive bibliography, Glossary and Index all for the readers convenience. The author also includes the work of Grandmaster Hwang Kee founder of the Moo Dyuk Kwan to resurrect Subak another lost fighting art and the instructions for learning the Subak's new Chil Sang Hyungs created by Grandmaster Hwang Kee based on the information in the book titled, Moo Yei Do Bo Tong Ji that he discovered in 1957 and worked for decades to get the Korean government to accept for Korea's national martial art and Olympic sport. Seller Inventory # APC9781974538140