Items related to One Million Followers: How I Built a Massive Social...

Kane, Brendan One Million Followers: How I Built a Massive Social Following in 30 Days

One Million Followers: How I Built a Massive Social Following in 30 Days 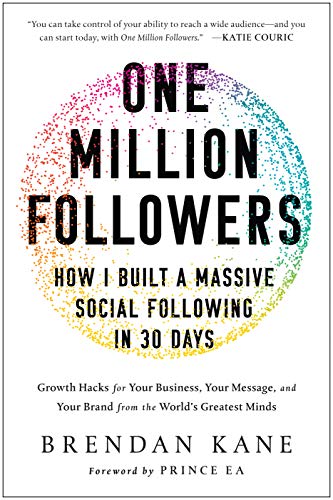 Over 60 billion online messages are sent on digital platforms every day, and only a select few succeed in the mad scramble for customer attention.

This means that the question for anyone who wants to gain mass exposure for their transformative content, business, or brand or connect with audiences around the globe is no longer if they should use social media but how to best take advantage of the numerous different platforms.

How can you make a significant impact in the digital world and stand out among all the noise?

Digital strategist and “growth hacker” Brendan Kane has the answer and will show you how—in 30 days or less. A wizard of the social media sphere, Kane has built online platforms for A-listers including Taylor Swift and Rihanna. He’s advised brands such as MTV, Skechers, Vice and IKEA on how to establish and grow their digital audience and engagement. Kane has spent his career discovering the best tools to turn any no-name into a top influencer simply by speaking into a camera or publishing a popular blog—and now he’ll share his secrets with you.

In One Million Followers, Kane will teach you how to gain an authentic, dedicated, and diverse online following from scratch; create personal, unique, and valuable content that will engage your core audience; and build a multi-media brand through platforms like Facebook, Instagram, YouTube, Snapchat, and LinkedIn.

Featuring in-depth interviews with celebrities, influencers, and marketing experts, including:

One Million Followers is the ultimate guide to building your worldwide brand and unlocking all the benefits social media has to offer. It’s time to stop being a follower and start being a leader.

“Today, the online world is so cluttered that even truly great content often gets buried or ignored. The good news is that you can take control of your ability to reach a wide audience—and you can start today, with One Million Followers.”

“When we needed help releasing a digital series that we knew could do so much good in the world, Brendan was the first person I called. I’m so happy he is writing a book and passing on his research and experience.”

—Justin Baldoni, star of Jane the Virgin, producer of My Last Days, and cofounder and CEO of Wayfarer

“Brendan is an outlier in a crowded market. His strategies are easy to implement and will lead to massive success. Working with him opened my eyes to the power of his ideas. He’s the best at what he does.”

“Brendan has done what most people only dream of doing. We’re so lucky he’s sharing his secrets. This book is a must-read.”

“Brendan’s success stories are all the more interesting as they relate to massive global brands like Taylor Swift, Rihanna, Jason Statham, Katie Couric, MTV, Vice, Lionsgate, and Yahoo! As a case study for this book he put his money where his mouth is and amassed one million real followers for himself with very little money over a very short amount of time. Testing and methodology are big parts of Brendan’s success, and he’s incredibly generous for sharing those aspects of his work with the world.”

“While it may be true that no one can predict what content will go viral, there is a tried-and-true formula experts use to maximize reach and stand out from the rest—and it will work for you, too. Brendan Kane gives you all the tips, tools, and insider secrets you need to make that happen.”

“Brendan’s focus on understanding how things work is infectious. His curiosity and knowledge will make you want to do better.”

“Brendan Kane will guide you through the fog of social media and its strategic application like the seer he is.”

“There’s an insane amount of noise online today—and it’s increasingly difficult to get your content, brand, or message across to the widest possible audience that matters to you. Unless you’ve read this book. Brendan’s done an incredible job of distilling tips, tools, and insider info into actionable advice that’s applicable for everyone.”

“Social Media is now a currency you can exchange for monetary gain or exposure. This book allows you to obtain the fundamentals from the greatest minds in the world. Hearing from the experts within each field to arm you with the nuggets you need for social media success!”

—Joivan Wade, founder of the Wall of Comedy and actor in The First Purge

“If you’re looking for a book to help you make a real and lasting impact in the complicated and ever-changing world of social media . . . look no further. Practical, definitive, and easy to read. Brendan Kane has written the bible.”

“Brendan gets the value of paid media better than anyone I know . . . and how really good content needs the right ignition and the right platform underneath it to be successful.”

“In this noisy world, winning a massive following may seem unrealistic. But by following the smart advice in One Million Followers, anyone can build a powerful and passionate fan base, starting now.”

—Dorie Clark, adjunct professor at Duke University’s Fuqua School of Business and author of Entrepreneurial You and Stand Out

“Brendan gives masterful and practical strategies that will help you reach your social media goals and beyond. Whether you want to build a brand, sell a product, or become an influencer, there is wisdom here so you can do just that.”

“I wish I had this book when I started my career as a video-director over a decade ago. I am extremely excited to apply what I learned from One Million Followers to my own social media platforms. Anyone who takes this book seriously and applies the lessons within is on the path to closer achieving their goals.”

“Brendan was shockingly able to generate a million followers for our nonprofit in less than fourteen days. I have never seen such rapid growth in social in my entire career.”

It seems to be an impossible puzzle but it's easy to solve a Rubik' Cube using a few algorithms.

Brendan Kane is a growth hacker for Fortune 500 corporations, brands, and celebrities. He helps brands find and engage new audiences, which reward relevant content, products, and services with attention and spending. Currently, he is advising Strike Social regarding entertainment partnerships. Strike Social is the largest TrueView Advertising and YouTube Intelligence company in the world. Strike Social runs over 2,500 TrueView campaigns a day for brands such as: Disney, Fox, NBC, Netflix, XBOX, LinkedIn, and many notable fortune 100 companies.

Brendan started his career at Lakeshore Entertainment where he oversaw all aspects of Lakeshore’s interactive media strategy. At Lakeshore, he worked on 16 films that generated a worldwide gross of $685 million dollars. While at Lakeshore, Brendan pioneered the first ever influencer campaign to effectively promote Lakeshore's movies. Brendan went on to build applications and platforms for celebrity clients such as Taylor Swift, Rihanna, Xzibit, Charles Barkley, Michael Strahan, super model Adrianna Lima, and pro skateboarder Ryan Sheckler. Brendan is known for creating an innovative application for Taylor Swift and Rihanna that can automatically turn any Facebook profile into a website in less than 60 seconds. More than 50 million people worldwide have accessed the applications and platforms that Brendan created for his celebrity clients. He also served as a consultant for the NHL and NFL Players Association on how to bolster their digital offering to both players and fans.

1. One Million Followers: How I Built a Massive Social Following in 30 Days

2. One Million Followers: How I Built a Massive Social Following in 30 Days

3. One Million Followers: How I Built a Massive Social Following in 30 Days