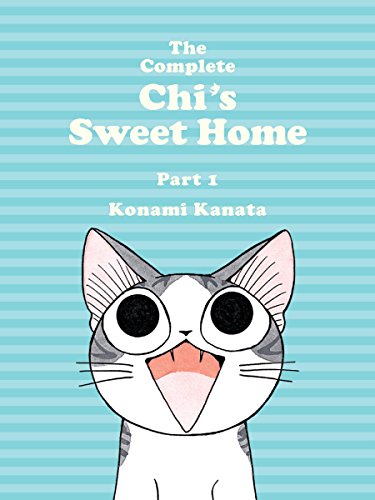 THE COLLECTED ADVENTURES OF THE WORLD S FAVOURITE KITTEN

This phenomenal feline is almost too 'kawaii' (cute) for her own good!

Chi is a mischievous newborn kitten who, while on a leisurely stroll with her family, finds herself lost. Overcome with loneliness she bursts into tears - but then she is rescued by a young boy named Yohei and his mother. The little kitty is whisked away into the warm and inviting Yamada apartment complex... where pets are strictly not permitted.

"Chi's Sweet Home is a charming, family-friendly story... Not that you need to be a kid to fall in love with Chi's Sweet Home; whatever your age, it's a wonderful collection to dip into." --MYM

Konami Kanata was born on July 3, 1958, in Nagano, Japan. A veteran manga artist Konami made her professional debut in 1982 with the serialized comic Petit Cat Jam-Jam for Kodansha's semenal shoujo manga magazine NakaYoshi. The daughter of an elementary school teacher, most of Konami's stories are for readers of all ages making her one of the most accessible artists in recent history.

In her nearly thirty year career, Konami has penned more than a dozen comic series, with the majority of them focusing on cats and pets. Konami is well regarded within the pet-manga community for her keen sense of cat ecology. Her ability to observe and render feline behavior has earned her respect from the Japanese manga community as a whole. While most of her properties were published for a younger female demographic, her most recent series Chi's Sweet Home is currently being published by Kodansha's Morning magazine, Japan's leading comic magazine for adult readers. Proving that quality can be found even in the cutest of sources.
Chi's Sweet Home will be Konami's first translated work.