Items related to My Grandmother's Hands 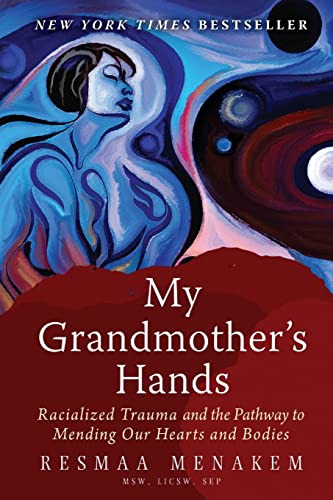 The body is where our instincts reside and where we fight, flee, or freeze, and it endures the trauma inflicted by the ills that plague society. In this groundbreaking work, therapist Resmaa Menakem examines the damage caused by racism in America from the perspective of body-centered psychology. He argues this destruction will continue until Americans learn to heal the generational anguish of white supremacy, which is deeply embedded in all our bodies. Our collective agony doesn't just affect African Americans. White Americans suffer their own secondary trauma as well. So do blue Americans--our police.

My Grandmother's Hands is a call to action for all of us to recognize that racism is not about the head, but about the body, and introduces an alternative view of what we can do to grow beyond our entrenched racialized divide.

Resmaa Menakem, MSW, LICSW, is a therapist with decades of experience currently in private practice in Minneapolis, MN, specializing in trauma, body-centered psychotherapy, and violence prevention. He has appeared on the Oprah Winfrey Show and Dr. Phil as an expert on conflict and violence. Menakem has studied with bestselling authors Dr. David Schnarch (Passionate Marriage) and Dr. Bessel van der Kolk (The Body Keeps the Score). He also trained at Peter Levine's Somatic Experiencing Trauma Institute.

My Grandmother's Hands: Racialized Trauma and the Pathway to Mending Our Hearts and Bodies

Sensitive and probing, this book from therapist Menakem delves into the complex effects of racism and white privilege. Departing from standard academic approaches, he speaks from the wisdom of his grandmother and his own expertise in somatic therapy, a field that emphasizes the mind-body connection. Trauma, both present-day and historical, forms the cornerstone of Menakem's analysis. He writes that race is a "myth--something made up in the 17th century," with the concepts of whiteness and racial superiority nonetheless now "essential facts of life, like birth, death and gravity." The result is that both black and white people are traumatized with fear of the racial other and with the "dirty pain of avoidance, blame, and denial." At the outset, Menakem implores readers to "experience" his book in their bodies. To this end, bodycentric activities, such as breath exercises, are described throughout. Menakem emphasizes body mindfulness, helping readers move from unhealthy reflexive responses to traumatic emotions to the conscious experience of "clean pain," which involves directly facing such emotions and thereby getting past them. Menakem is specific when directing his messages. "To all my white readers," he says, "welcome... let's get to work." To law-enforcement officers he gives the same welcome. And to African-Americans, he offers counsel and highlights the value of their experiences. (Sept.)

LIBRARY JOURNAL (Starred Review) Menakem, Resmaa. My Grandmother's Hands: Racialized Trauma and the Pathway to Mending Our Hearts and Bodies. Central Recovery. Sept. 2017. 306p. ISBN 9781942094609. $27.95; pap. ISBN 9781942094470. $17.95; ebk. ISBN 9781942094487. SELF-HELP Community Care Counselor Menakem, MSW, LICSW, SEP, posits that racism is embedded in the hearts, souls, and reflexes of both blacks and whites in American society, and that the trauma (as he describes in depth) inflicted on many as a result of this fact is harmful to all. Menakem then helps readers get inside the black experience to encounter everyday threats and the responses of fighting, fleeing, or freezing in order to begin the healing process. The guided exercises and social commentary help to pave the way for understanding one another and building a stronger community that benefits everyone. VERDICT An exceptionally thought-provoking and important account that looks at race in a radical new way. For all readers.

For the past three decades, we've earnestly tried to address white-body supremacy in America with reason, principle and ideas-using dialogue, forums, discussions, education and mental training. But the widespread destruction of Black bodies continues. And some of the ugliest destruction originates with the police. Why is there such a chasm between our well-intentioned attempts to heal and the ever-growing number of dark-skinned bodies... killed or injured?My Grandmother's Hand is a call to action for Americans to recognize that racism is not only about the head, but also about the body. [The book] introduces an alternative view of what we can do to grow beyond our entrenched racialized divide and takes readers through a step-by-step healing process based on the latest neuroscience and somatic healing methods."

Like Bill Withers, Resmaa Menakem had a wise grandmother who played a pivotal role in shaping him during the formative years of his life. For that reason, he acknowledges the debt of gratitude owed to Addie Coleman, whose tenderhearted spirit permeates his new book, My Grandmother's Hands.

But the groundbreaking opus isn't merely a fond memoir about a late loved one, but rather a sobering how-to tome endeavoring to identify and alleviate deep-seated traumas afflicting blacks and whites alike. For the author, a veteran therapist who has appeared as a guest on such TV shows as Oprah and Dr. Phil, fervently believes that racism can't be eradicated by conversation across the color line alone, as so often suggested by well-meaning political pundits. He asserts that race-based trauma is so embedded in our bones that it can "alter the DNA" and thus be passed from one generation to the next. Consequently, his innovative recipe for recovery incorporates a hands-on approach to healing the body as well as metaphysical measures for soothing the soul. The book is basically a mix of diagnostic discussion, anecdotal evidence and invaluable exercises designed to enable the reader to recognize his or her need for treatment and then get themselves started on the road to recovery. Though the highly-charged subject-matter might ordinarily be controversial in nature, this text is written in a non-confrontational style apt to disarm, engage and enlighten readers, regardless of color or political persuasion. Kudos to Resmaa Menakem for such a sorely-needed seminal work which couldn't be more practical or more timely, given this bitterly-divided country's current state of race relations.

"an extremely interesting approach and a much-needed paradigm shift in the treatment of racialized trauma . . ."

The title of this book My Grandmother's Hands comes from the author's memory and later recognition of the racialized trauma embodied and embedded in his grandmother's hands. "She wasn't a large woman but her hands were surprisingly stout, with broad fingers and thick pads below each thumb." As she explained "That's from picking cotton. They been that way since before I was your age. I started working in the fields sharecroppin' when I was four."

The book addresses the issue of white supremacy in America and the trauma it inflicts on African Americans ("the Black body"), Americans of European descent ("the white body"); and "police bodies," which stands for the bodies of law enforcement professionals regardless of their color.

Resmaa Menakem who is "a healer, and a therapist, not a philosopher or literary stylist" maintains that while we will continue to battle racism through reason, principles and ideas this is insufficient to address the real seats of the problem where it lies embedded in our "soul brain" and "lizard nerves."

He believes that trauma is passed through families by abuse; through unsafe structures, institutions, and cultural norms; and through our genes as is being revealed through recent work on epigenetics.

The therapies and behavioral changes (often very minute), which he proposes for each of the three groups addressed, aims to heal the trauma by "fostering resilience in our bodies and plasticity in our brains." His hope is that through reading the book in whole or in part readers will create a "little extra room in your nervous system for flow, for resilience for coherence, for growth and above all, for possibility."

This is an extremely interesting approach and a much-needed paradigm shift in the treatment of racialized trauma for all groups who are participants in the process.

Jane Haile is currently an Independent consultant on women's empowerment and gender equality. Her vast global human rights experience includes a variety of assignments working for the United Nations and the European Union. She is a Fellow of the Royal Anthropological Society, London, U.K., and her writing has been published by several academic presses.

Resmaa Menakem, MSW, LICSW, SEP, has appeared on both The Oprah Winfrey Show and Dr. Phil as an expert on conflict and violence. He has served as director of counseling services for the Tubman Family Alliance; as behavioral health director for African American Family Services in Minneapolis; as a domestic violence counselor for Wilder Foundation; as a certified Military and Family Life Consultant for the U.S. Armed Forces; as a trauma consultant for the Minneapolis Public Schools; and as a Cultural Somatics consultant for the Minneapolis Police Department. As a Community Care Counselor, he managed the wellness and counseling services for civilians on fifty-three US military bases in Afghanistan. Resmaa studied and trained at Peter Levine's Somatic Experiencing Trauma Institute, as well as with Dr. David Schnarch (author of the bestselling Passionate Marriage) and Bessel van der Kolk, MD (author of the bestselling The Body Keeps the Score). He currently teaches workshops on Cultural Somatics for audiences of African Americans, European Americans, and police officers. He is also a therapist in private practice.