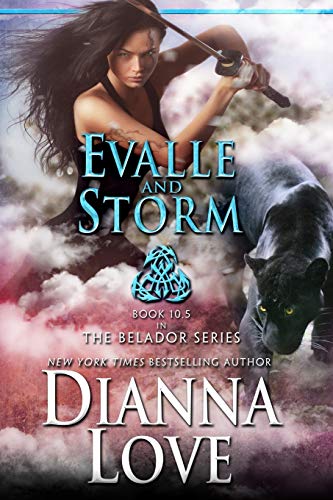 New York Times bestseller Dianna Love’s Beladors are back with a special story for Evalle and Storm! This is the book fans have been waiting for - Evalle and Storm's. To bond or not to bond should be a simple question, but nothing is ever easy in the life of this particular Skinwalker and Belador couple. Investigating a strange death in unfamiliar territory threatens to rip them apart forever as Storm tracks a predatory majik killing in the cruelest ways and Evalle makes a dangerous gamble to save what’s left of her disappearing preternatural powers ... and herself. Until he completes the mating bond with Evalle, Storm has no way to find her if she's kidnapped again and preternaturals are actively hunting her in a chaotic Atlanta. Word hasn't gotten out that she can no longer shift into a powerful gryphon. When Storm’s estranged uncle in Arizona pleads for help in finding the cause behind a strange death on his tribe’s reservation, Storm agrees to go just to get Evalle out of the city and somewhere safe. A good idea on paper, not so much when he confronts a predatory majik that attacks his.Prior to surviving a brutal imprisonment, Evalle wanted nothing more than to bond with her Skinwalker mate to share their lives and energy. She cheated death upon escape only to discover she’s lost he ability to shift into a gryphon and her powers are failing. Opening a connection with her Storm could destroy his as she discovers her body is going through new insurmountable changes. When she’s offered a chance to bring her gryphon back, Evalle jumps at it, determined to heal herself and save her life with Storm. Too late, Storm realizes he’s made a deadly mistake by bringing his mate with him.“As always, Dianna Love delivers another sensational story that will blow your mind.” ~~ The Reading Café on the Beladors

“When it comes to urban fantasy stories, Dianna Love is a master." ~~ Always Reviewing

“Ten books in and the series is still getting even better with each book.” ~~ Goodreads

“It was worth every day of waiting.” ~~ J. Cazares, Amazon

“...It’s been a very long time since I've felt this passionate about getting the next installment in a series. Even J. K. Rowling's Harry Potter books.” ~~Bryonna Nobles, Demons, Dreams and Dragon Wings

Book Description Silver Hawk Press, United States, 2019. Paperback. Condition: New. Language: English. Brand new Book. New York Times bestseller Dianna Love's Beladors are back with a special story for Evalle and Storm! To bond or not to bond should be a simple question, but nothing is ever easy in the life of this particular Skinwalker and Belador couple. Evalle cheated death after Storm and her friends pulled her from a brutal imprisonment in another realm only to now end up unable to shift into her gryphon. Against his better judgment, Storm agrees to hold off on bonding while they travel to Arizona to help his uncle figure out what is behind an unnatural death on the reservation. The more powers Evalle loses, the more she realizes linking to Storm could be lethal. As the investigation takes an unexpected turn, Evalle jumps at a chance to regain her gryphon and powers in an all-or-none gamble, but makes a deadly mistake. Storm has a breakthrough on the unnatural deaths only to realize he's put a target on Evalle's back. "As always, Dianna Love delivers another sensational story that will blow your mind." The Reading Café on the Beladors. Seller Inventory # AAV9781940651026