Items related to Morgan and Me: 7 (Serendipity Series, 7)

Morgan and Me: 7 (Serendipity Series, 7) 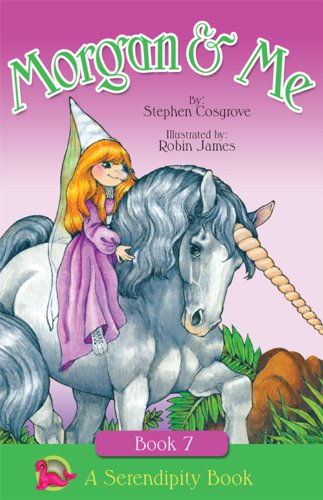 On the northern slope of the island of Serendipity is a small, wonderful kingdom called the Land of Later. In this kingdom there lived a young, beautiful princess who everyone simply called Princess. The castle was governed by the king's simple rules. One of those rules was that when you woke in the morning, you cleaned your room and made your bed. Princess hated rules. Most of all, she hated doing anything at any time unless it was much, much later. This morning, as on others, she awoke, got dressed, and went outside and took a walk instead of cleaning her room. Princess walked into the forest near the castle. "I should start back before I get lost," she whispered to a bunny on the path. Then she laughed, "I will go back but just, just a little later!" It was on the journey that Princess met a unicorn called Morgan. And it was on this journey, with the help of Morgan, that she learned that doing things now is always much better than later.

Stephen Cosgrove is one of the best-selling children’s book authors of all time. His writing career began in 1973 when, while shopping at bookstores for his three-year-old daughter, he was frustrated by the lack of fun-to-read picture books that also convey positive values. Consequently, he decided to write his own stories. Cosgrove went on to create four titles that became the foundation of his best-selling Serendipity series, which has sold over 80 million copies worldwide. Since then, he has written more than 300 books, some under his own name and others using pseudonyms, ranging from picture books to young adult thrillers. The winner of the Coors Lumen Award for family values and multiple Children’s Choice Awards, he lives in Austin, TX.

Robin James is a gifted illustrator and a native of the Pacific Northwest. She has loved art and animals all her life and has been drawing ever since she could hold a pencil. Through the years, she has created a wide variety of artwork from animal portraits to wildlife paintings and has illustrated over 75 children’s books, and is published worldwide. She lives in Snohomish, WA.

Morgan and Me (Serendipity Series, 7)

Morgan and Me (Serendipity Series, 7)