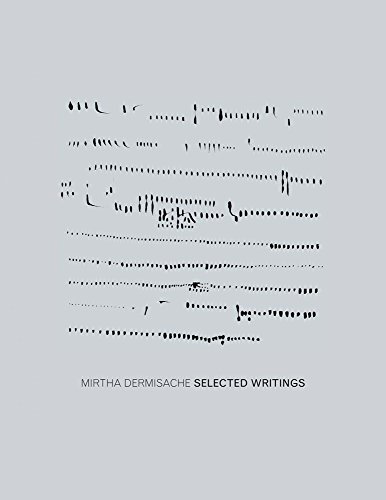 Argentinian artist Mirtha Dermisache (1940-2012) wrote dozens of books, hundreds of letters and postcards, and countless texts. Not a single one was legible, yet, in their promixity to language, they all resonate with a mysterious potential for meaning. Using ink on paper, Dermisache invented an array of graphic languages, each with their own unique lexical and syntactic structures. Some resemble a child's scrawl; others feel like nets or knots or transcriptions of seismic waves. Praised by Roland Barthes in the early '70s for the "extreme intelligence of the theoretical problems related to writing that [her] work entails," Dermisache's graphisms suggest both an abstract "essence of writing" and a concrete democratization of written forms. Selected Writings, the first collection of Dermisache's works to be published in the US, collects two complete books and a selection of texts from the early 1970s, a rich and prolific period for the artist.

Her work, which she created while living under the junta in Argentina, is lasting and subversive even though she barely penned a legible word...In our current environment, it is difficult to look at her work and not think about the impossibility of discourse, the primacy of self-expression, and the fallacy of a shared objective language, not to think of this art as both radically political and necessary today.--Will Fenstermaker "The Paris Review "

Dermisache's writings will never disclose all their flinty secrets, but lately it has become easier to understand something of what they've been trying to tell us all along.--Louis Bury "Hyperallergic "

I wondered if I was seeing in this mode of illegible writing a performance of doubt, an author's hand hovering over and exploring the contours of an idea or feeling, unsure of how to proceed, and when continuing onward, doing so only haltingly.--John Vincler "The Paris Review Daily "

Each of these writings constitutes an autonomous world, a small kingdom that does not exist outside of the gestures that have shaped it.--Saposcat

Dermisache's aim for interaction creates a dynamic tension with the private language we encounter in her writings.--Henrique Faria "Artforum "

Think of this "book" as a primer that instructs us in nothing other than how to brilliantly rearrange loops, humps, and strokes (the hand's path from one letter to another) into a wholly othered coherence.--Joe Milazzo "FullStop "

A poetic reminder that language itself is an invention.--Maria Popova "Brainpickings "

Her lines include no recognizable alphabetical markings; instead, they gather and space in such a way as to evoke language without producing it.--Megan N. Liberty "The Brooklyn Rail "