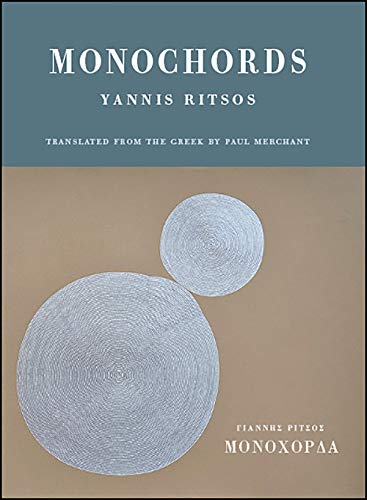 Poetry. Translated from the Greek by Paul Merchant. "The poems in this volume were written in the village of Karlovasi on Samos at the rate of about ten a day in the summer of 1979, a first draft written August 1st through 26th, the second completed by September 1st. After becoming dangerously ill in 1968, Ritsos had been released from the prison island of Leros and sent to strict house arrest on Samos, where his wife had a medical practice. He was allowed to return to Athens and to publish again in 1971. He subsequently spent summers on Samos, for instance in 1972, 1975, and 1979, when these poems were composed."--Paul Merchant

Yannis Ritsos was born in 1909 at Monemvasia in the Peloponnese. A lifetime communist, his unpretentious, memorable poems were a prominent feature of his active resistance to the German occupation of Greece and to a succession of fascist regimes. They led to the public burning of his lament Epitaphios in 1936 by the Metaxas dictatorship, and to his imprisonment during the Civil War from 1948-1952 and again during the 1967 dictatorship of the Colonels. He was transferred from this imprisonment to island exile on Samos when he became dangerously ill, and was allowed to return to Athens and to be published again in 1971. He was awarded the prestigious Lenin Prize in 1975 and received honorary degrees from the universities of Thessaloniki, Birmingham, Leipzig, and Athens. During his highly productive life he worked as an actor, dancer, book editor, calligrapher, and author of over eleven volumes of translations. His more than one hundred volumes divided between long meditations on historical themes and short enigmatic reflections on everyday events have been translated into over forty languages in more than three hundred editions. He died in November 1990, aged eighty-one.

Buy Used
Condition: Good
Ships in a BOX from Central Missouri... Learn more about this copy

Book Description Tavern Books, 2017. Paperback. Condition: Good. Ships in a BOX from Central Missouri! May not include working access code. Will not include dust jacket. Has used sticker(s) and some writing or highlighting. UPS shipping for most packages, (Priority Mail for AK/HI/APO/PO Boxes). Seller Inventory # 002099356U

Book Description Tavern Books, 2017. Condition: Good. A+ Customer service! Satisfaction Guaranteed! Book is in Used-Good condition. Pages and cover are clean and intact. Used items may not include supplementary materials such as CDs or access codes. May show signs of minor shelf wear and contain limited notes and highlighting. Seller Inventory # 1935635700-2-4

Book Description Tavern Books, 2017. Paperback. Condition: GOOD. Has little wear to the cover and pages. Contains some markings such as highlighting and writing. Supplemental materials are not guaranteed with any used book purchases. Seller Inventory # 1935635700_abe_gd