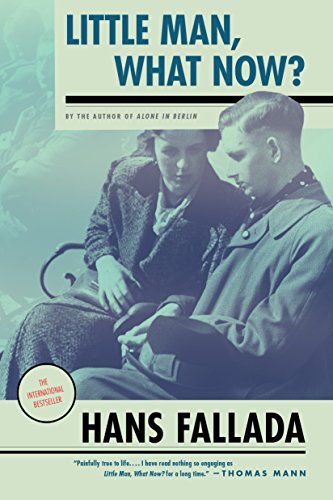 This is the book that led to Hans Fallada's downfall with the Nazis. The story of a young couple struggling to survive the German economic collapse was a worldwide sensation and was made into an acclaimed Hollywood movie produced by Jews, leading Hitler to ban Fallada's work from being translated. Nonetheless, it remains, as the Times Literary Supplement notes, ""the novel of a time in which public and private merged even for those who wanted to stay at home and mind their own business.""

The only novel reviewed in this Broadcast that one can wax really enthusiastic over. And its history in Germany indicates real sales possibilities, as it has rivalled the success of ALL QUIET ON THE WESTERN FRONT over there. An intensely poignant story of two young Germans caught in the tide of the unemployment problem in Germany. There is a resemblance to the theme of NOBODY STARVES, but the approach is lighter, the handling is from the human standpoint rather than the laboratory method, and the tone has an upward lilt that is lacking in the American scene. Germany is more accustomed to grinding poverty, in this generation, and more eager to seize on simple pleasures, and the reflection of this is apparent in the book. One feels that at times there is a showing off of the modern spirit in the method of handling unnecessary subjects, but otherwise the book is intuitively human and natural, and in almost no sense sophisticated. The illustrations are misleading - done in a vein of caricature, by Georges Schreiber. They make the reader expect a satirical book in the Thurber and White tradition. A book the staff should read to sell. (Kirkus Reviews)

Before WWII , German writer Hans Fallada’s novels were international bestsellers, on a par with those of his countrymen Thomas Mann and Herman Hesse. In America, Hollywood even turned his first big novel, Little Man, What Now? into a major motion picture.

Learning the movie was made by a Jewish producer, however, Hitler decreed Fallada’ s work could no longer be sold outside Germany, and the rising Nazis began to pay him closer attention. When he refused to join the Nazi party he was arrested by the Gestapo—who eventually released him, but thereafter regularly summoned him for “discussions” of his work.

However, unlike Mann, Hesse, and others, Fallada refused to flee to safety, even when his British publisher, George Putnam, sent a private boat to rescue him. The pressure took its toll on Fallada, and he resorted increasingly to drugs and alcohol for relief. After Goebbels ordered him to write an anti-Semitic novel, he snapped and found himself imprisoned in an asylum for the “criminally insane”—considered a death sentence under Nazi rule. To forestall the inevitable, he pretended to write the assignment for Goebbels, while actually composing three encrypted books—including his tour de force novel The Drinker—in such dense code that they were not deciphered until long after his death.

Fallada outlasted the Reich and was freed at war’s end. But he was a shattered man. To help him recover by putting him to work, Fallada’s publisher gave him the Gestapo file of a simple, working-class couple who had resisted the Nazis. Inspired, Fallada completed Every Man Dies Alone in just twenty-four days.

He died in February 1947, just weeks before the book’s publication.