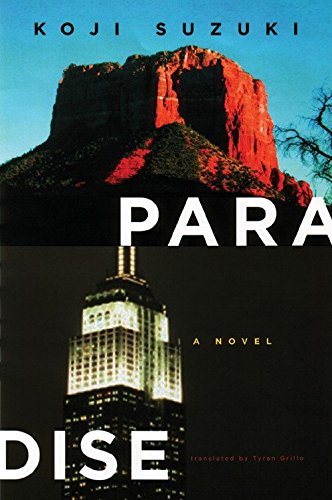 From the writer of the Ring trilogy comes an unconventional love story. In the arid badlands of prehistoric Asia, a lovelorn youth violates a sacred tribal taboo against representing human figures by etching an image of his beloved. When the foretold punishment comes to pass, the two must embark on a journey across the world, and time itself, to try to reclaim their destiny. A mysterious spirit guides them towards a surprise destination that readers may indeed find close to home.

Praise from PETER STRAUB, author of In the Night Room

"This first novel by Koji Suzuki, who went on to reinvent contemporary horror in the classic Ring trilogy, gleams with imaginative power. A love story refracted through time, Paradise pretty much made time disappear while I read it-one whole Saturday flew past. What a pleasure, and what a wonderful writer." About the Author:

Koji Suzuki was born in 1957 in Hamamastu, southwest of Tokyo. He attended Keio University where he majored in French. After graduating he held numerous odd jobs, including a stint as a cram school teacher. Also a self-described jock, he holds a first-class yachting license and crossed the U.S., from Key West to Los Angeles, on his motorcycle.

The father of two daughters, Suzuki is a respected authority on childrearing and has written numerous works on the subject. He acquired his expertise when he was a struggling writer and househusband. Suzuki also has translated a children's book into Japanese, The Little Sod Diaries by the crime novelist Simon Brett. Paradise is Suzuki's fifth novel to appear in English. His current work in progress is Edge City, a novel of quantum horror. He is based in Tokyo but loves to travel, often in the United States.

Book Description Vertical Inc., United States, 2007. Hardback. Condition: New. Language: English. Brand new Book. What if your soul mate isn't encountered once in a lifetime but once in millennia? From the unique imagination of the author of the Ring trilogy, which inspired blockbuster films on both sides of the Pacific, comes an unconventional love story that finds the Japanese master delivering a pure page-turner outside the horror genre. Comprising three distinct parts each of which is a tale of adventure, Paradise demonstrates that the sinister poet of humidity who made use of wetness to raise chills in Dark Water is just as much in his element plotting adrenalin-fueled searches across the desert. In the arid badlands of prehistoric Asia, a lovelorn youth violates a sacred tribal taboo against representing human figures by etching an image of his beloved. When the foretold punishment comes to pass, the two must embark on a journey across the world, and time itself, to try to reclaim their destiny. A mysterious spirit guides them towards a surprise destination that readers may indeed find quite close to home. Published a year before Ring, Paradise was Koji Suzuki's groundbreaking first novel that launched his career as a fiction writer. Winner of the Japan Fantasy Award, it was immediately made into an animated TV series. Filled with exotic locales, betrayal, action, romance, and ideas, Paradise should delight fans of David Mitchell's Cloud Atlas as well as devotees of the non-horror fare of Stephen King, to whom Suzuki is frequently compared. Seller Inventory # BZV9781932234237

Book Description Vertical, 2006. Soft cover. Condition: New. ADVANCED READER'S EDITION. ADVANCE READING COPY with a complete number line beginning in 1. The book is in NEW & UNREAD condition, no flaws or defects -SOFT cover in PICTORIAL WRAPS (Designed by Chip Kidd) as issued - SIGNED BOLDLY AND DATED IN BOTH JAPANESE AND ENGLISH ON THE TITLE PAGE!!! A VERY COLLECTIBLE COPY OF THIS BOOK - PHOTOS OF THE ACTUAL BOOK SENT UPON REQUEST. FROM THE AUTHOR OF "RING" - THIS IS AN INTRODUCTORY PRICE FOR OUR GRAND RE-OPENING. ALL PRICES WILL BE ADJUSTED IN LATER TO REFLECT MARKET PRICES. All books are boxed and shipped with bubble wrap - ALL BOOKS HAVE BEEN BOXED IN CLIMATE CONTROLLED STORAGE AND HAVE NOT BEEN TOUCHED BY ANY OTHER HUMAN THAN ME FOR AT LEAST THE LAST 10 YEARS - ALL BOOKS ARE SEALED AND BUBBLE WRAPPED AND SHIPPED IN BOXES - YOU CAN BUY HERE WITH CONFIDENCE KNOWING THAT A BUNCH OF STRANGERS HAVE NOT HANDLED YOUR BOOK -. Signed by Author(s). Seller Inventory # 001290