Items related to Bill Burke: I Want to Take a Picture

Bill Burke: I Want to Take a Picture

Bill Burke: I Want to Take a Picture 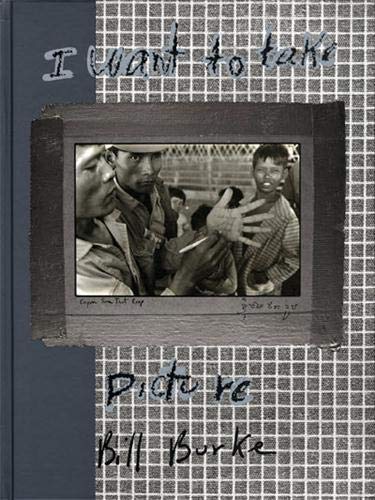 Twin Palms Publishers is pleased to offer a reprint of Bill Burke's seminal book originally published by Nexus Press in 1987. In the early 1980's Burke traveled to Thailand and Viet Nam, as well as Cambodia where he documented the aftermath of the Khmer Rouge regime. The book will be produced using the original plates, and will feature the same layout and scale as the first edition.

1. I Want To Take Picture

2. I Want To Take Picture

3. Bill Burke: I Want to Take a Picture (Hardback)

Book Description Twin Palms Publishing,U.S., United States, 2007. Hardback. Condition: New. Reprint. Language: English. Brand new Book. Twin Palms Publishers is pleased to offer a reprint of Bill Burke's seminal book originally published by Nexus Press in 1987. In the early 1980's Burke traveled to Thailand and Viet Nam, as well as Cambodia where he documented the aftermath of the Khmer Rouge regime. The book will be produced using the original plates, and will feature the same layout and scale as the first edition. Seller Inventory # ART9781931885638

4. I Want To Take Picture

6. I Want To Take Picture

7. I Want To Take Picture

Book Description Twin Palms Publishers, Santa Fe, New Mexico, 2007. Hardcover. Condition: New. 1st Edition. First edition thus (Twin Palms Publishers), first printing. Signed in black marker verso the front free endpaper by Burke, with his personal black 'Actual Signature' and red 'Bînh Fótň' stamps added. Hardcover. Photographically illustrated laminated paper-covered boards, no dust jacket as issued. Photographs and text by Bill Burke. Unpaginated with numerous four-color and black and white plates, designed by Burke (who also originally made the duotone and halftone separations) while in residency at Nexus Press in 1987. 15-1/4 x 11-1/2 inches. This first Twin Palms edition was limited to 2000 hardbound copies. New in publisher's shrink-wrap (slit open for signature). Since the early 1980s, Bill Burke has photographed extensively in Southeast Asia, focusing primarily in Cambodia, Laos and Vietnam. Burke's haunting and layered examination of the landscape and people is informed by the collective political and social conscience galvanized by the United States' lengthy occupation and annihilation of these regions before, during, and after the Vietnam War. His lifelong desire to connect personally and viscerally to the people he meets sets his work in an altogether separate category from most artists who photograph outside their circumscribed "experience." Neither overtly political nor proscriptive, Burke's work instead recognizes the personal is indeed political. Gone are the cultural stereotypes we have long seen in images of Southeast Asia. Instead we are able to experience the intensity of the individual through Bill Burke's idiosyncratic and careful observation. He obliterates the notion that the "documentary photograph" is a vehicle for "truth" and compellingly shows the viewer that it is always a form of personal or political propaganda. 'I Want to Take Picture' (originally published by Nexus Press in 1987) is a combination artist book and 'travelogue.' It is considered by many to be one of the very best, disturbing and important books in the history of photography. From Bill Burke (1987): "Each day, I was thinking about practicality, is my pass in order, how do I get there, who do I meet that will get me through. The philosophical thoughts came later. When I realized that I had access to the camps and could see the Khmer Rouge, it was like being able to see the Devil. It seamed to be an incredible opportunity." From an interview with Bill Burke by Willis Hartshorn (New York City, June 1987): "Hartshorn: 'Do you find it problematic that in a politically savage environment your pictures are often ambiguous as to who's good and who's bad?' Burke: 'I have no problem with ambiguity. Again, all the information is filtered, everything I know about it is secondhand. I know what the refugees at the border say and what books say. I heard how bad the Khmer Rouge were, and then as I read more I found out the other people had been bad too. The people who were victims at one time were victimizing others at another time. There are two sides, the information is slanted, and it's good that people understand that. . . I would like things to be spelled out clearly so I wouldn't have to think about it. But that's not the way it is. I can't say this is this and that is that. There is no indisputable truth.'" Signed by Author. Seller Inventory # 105107

Book Description Twin Palms Publishers, Santa Fe, NM. 1987 (2007). Illustrated Boards. Condition: As New. First Edition Thus 1/2000. np (60pp), profusely illustrated in color and duotone. "In 1982, years after Viet Nam, I decided to give myself my own Southeast Asia experience. I wanted to make pictures in a place where I didn't know the rules, where I'd be off balance. Friends who had been there recommended Thailand; nice people, easy transportation, good food. Another friend told me that as long as I was going to Thailand I should go see the refugees coming out of Cambodia. He set me up with The International Rescue Committee, which was working at the Thai-Cambodian border". Published in 1987, "I Want to Take Picture" features black and white images which Burke shot during several trips through Southeast Asia in the early eighties, particularly focusing on the after-effects of the Khmer Rouge regime in Cambodia. A pristine copy of the 2007 first Twin Palms printing (whose 1987 first Nexus Press edition is cited on page 19 of Martin Parr and Gerry Badger's "The Photobook: A History Volume II", pages 40-41 of The Hasselblad Center's "The Open Book", and pages 258-259 of "The Book of 101 Books") that was limited to two thousand copies. PLEASE NOTE: Additional shipping costs are required for this item beyond our standard rates due to its weight - we will inform you of the applicable amount at time of purchase. Photography Monograph. Seller Inventory # 022180