Items related to The Voyage of the 'Fox' in the Arctic Seas:...

Sir Francis Leopold McClintock, Shelagh D. Grant The Voyage of the 'Fox' in the Arctic Seas: In Search of Franklin and His Companions (Classics West)

The Voyage of the 'Fox' in the Arctic Seas: In Search of Franklin and His Companions (Classics West) 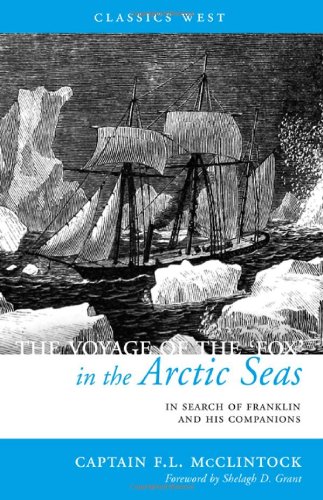 In 1845, Sir John Franklin set off from England to locate and chart the elusive Northwest Passage. He and his crew of one hundred and twenty-eight men never returned.

Over the following decade, forty expeditions were launched in an effort to establish the fate of the missing men. But it wasn't until 1854 that traces of their demise were discovered along the western shore of King William Island.However, without further proof, Franklin's wife, Lady Jane, refused to believe that her husband was dead. And so, in 1857, she sponsored a final expedition. Captain Francis Leopold McClintock, a highly regarded Arctic explorer, was given command of the steam yacht Fox, and he and a crew of twenty-five set off in search of evidence. On this quest, the always-adventurous McClintock was the first European to navigate through Bellot Strait and while the Fox was frozen into the ice in winter, he and his men made long and arduous exploratory journeys by dogsled. Eventually the men reached King William Island, where they discovered a cairn at Victory Point. It contained a note that confirmed Sir John Franklin had died in 1847. When news of the expedition's success reached England, Queen Victoria bestowed the Arctic Medal on McClintock and all the officers and men of the Fox.The Voyage of the 'Fox' in the Arctic Seas is Sir Francis McClintock's own thrilling account of the Fox's journey into the Arctic, and the discovery of the fate of Sir John Franklin and his companions.

Sir Francis Leopold McClintock (1819-1907) was an Irish adventurer and explorer known for his discoveries in the Canadian Arctic Archipelago. He joined the navy in 1831 and over the course of his career participated in countless expeditions. The most famous of these expeditions is probably the voyage of the Fox in 1857, which finally discovered proof of the fate of Sir John Franklin and his crew, who had disappeared in 1845. McClintock is also credited with perfecting certain sledging techniques and completing the mapping of the final sector of unexplored mainland Arctic coastline in the Boothia Peninsula area. Knighted in 1860, and promoted to admiral in 1884, he was known for his generosity and his exceptional skill as an Arctic explorer.

1. The Voyage of the 'Fox' in the Arctic Seas: In Search of Franklin and His Companions (Classics West)