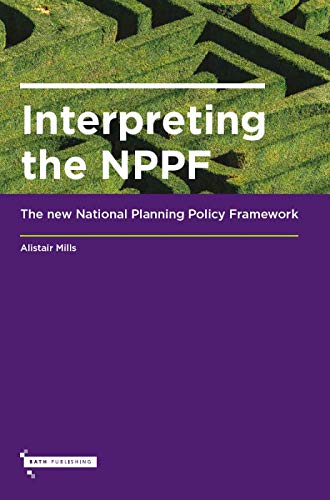 In July 2018 a revised National Planning Policy Framework was published, coming into effect immediately. First published in 2012, the NPPF is the key expression of the Government s planning policies for England. The NPPF sets out a framework for the production of locally-prepared plans, and is a material consideration in planning applications. Its correct interpretation is a matter of law, and there has been a wealth of litigation regarding the interpretation of the first version. But what exactly has changed and how will the courts seek to interpret the new version? Interpreting the NPPF: The New National Planning Policy Framework will be the first book to explain in depth the revised NPPF to planners, developers and legal advisers throughout England. Alistair Mills of Landmark Chambers will provide an accessible explanation of the legal approach to the new NPPF through: a clear exposition of the nature, role, and approach to interpretation of national planning policy; insights regarding the structure and wording of the new NPPF; consideration of the extent to which case law interpreting the wording of the 2012 NPPF applies to the new version; a review of the major changes brought about by the new NPPF, including the amended wording of the presumption in favour of sustainable development, the Housing Delivery Test, and the approach to amendment of Green Belt boundaries The book will be essential reading for anyone with an interest in local planning and development - including planners, developers and their advisers - helping everyone make and contribute to plans, applications and decisions which are based on a correct understanding of the NPPF.

Alistair Mills is a member of Landmark Chambers, one of the country's leading sets of planning barristers. He works for a range of clients in the planning field: private developers, objectors, central and local government. He has been in major court cases concerning planning law and policy. He is an External College Lecturer in Law at Magdalene College, Cambridge, and is an Assistant Editor of the Encyclopedia of Planning Law and Practice. He also maintains a digest of decisions relating to the NPPF on the Landmark Chambers website.