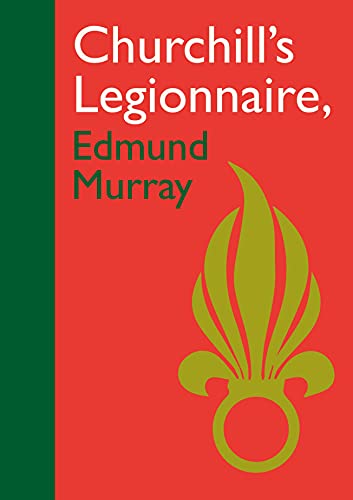 Book Description Hardback. Condition: New. Language: English. Brand new Book. In 1937 aged just 19, Edmund Murray left his family and a comfortable job in London, caught the boat train to France and signed up for the minimum of five years' service with the French Foreign Legion. Armed with little more than school-boy French and a desire for a life of adventure, Murray travelled through France and on to the Legion's headquarters in Algeria where he completed a gruelling three-month basic training programme. He went on to serve in Morocco and Indochina (now Vietnam) where towards the end of the War, his regiment were forced to retreat from invading Japanese forces into China where his service ended after eight years as a Legionnaire. Throughout the Second World War, Murray's overwhelming sense of duty compelled him to try to leave the Legion and join the Allied forces, but he was thwarted at every attempt. He was an Englishman, in a French organisation, by definition a home for 'the men with no names', during a time of global conflict where battle lines and countries' boundaries changed almost daily. He was an anomaly, a diplomatic puzzle. But as such, his was an extraordinary war-time experience. This book, which borrows heavily from Murray's earlier book, Churchill's Bodyguard, includes rare personal insights into Legion life from drills and manoeuvres, to feast-days and festivals as well as accounts of friendships forged in exceptional circumstances and which would last a lifetime. It also documents a unique war-time experience of the man whose sense of duty never faltered and led him, in later life, to become bodyguard to Sir Winston Churchill. Edited by his son Bill Murray, this is the story in his own words of Edmund Murray, Churchill's Legionnaire, and his service in the French Foreign Legion from 1937 to 1945. Seller Inventory # AAJ9781913491253