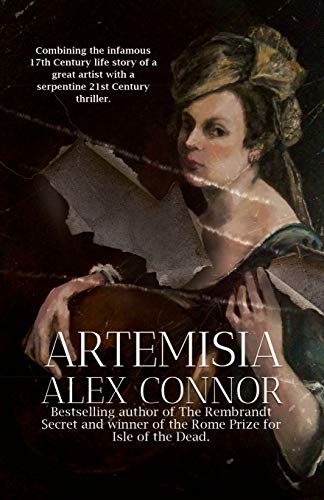 Three 17th Century notebooks are left to Cornelia Stein in London. They tell the story of the most infamous female artist who ever lived. The notebooks interest not only museums but spark a feeding frenzy in the art world, collectors desperate to obtain the priceless artefact - whatever the cost. And so the lives of two women - one from 17th Century, one from 21st Century - mesh. Artemisia talks of sex, triumph and death, as she fights with her patrons and protects her family, and at the same time Cornelia Stein finds herself in unexpected danger as she defies the male bastions of the art world to ensure Artemisia's legacy. In the time of #MeToo and Women's Rights, Artemisia Gentileschi's extraordinary story will resonate with every woman. Dismissed and defamed for centuries, her time has now come. The last words belong to Artemisia: 'I will show you what a woman can do.'

Alexandra Connor has wanted to write this book about Artemisia for many years, seeing in Artemisia's story some parallels with her own. Alexandra has also been a victim of violence, and as a working artist knows the art world intimately. She is also an art historian and four of her books on Caravaggio have been published by Quercus and Newton Compton. She has been a presenter on This Morning, has appeared on many shows talking about her personal experiences, and also about the Arts; appearing also on television in UK, Europe and Russia. Her talk on motivation - called 'The Phoenix Phenomenon' - and her extraordinary biography has been written about in The Sunday Times, The Telegraph, Daily Mail and Express, as well as many other papers and magazines in UK, USA and Europe. Alexandra's books are in print worldwide and translated into many languages. In 2017 she won The Rome Prize for THE ISLE OF THE DEAD, (Il Dipinto Maledetto) She is listed in Debrett's Prominent People of Today and is a Fellow of the Royal Society of Arts. Her books are available in hardback, paperback, eBooks and she has recorded seventeen of her own novels onto CD. As an art historian, Alex's primary interest is in Caravaggio and his followers, obviously Artemisia Gentileschi, and the Baroque period. The Daily Telegraph said of her: `Everyone should be forced to have a teaspoon of Alexandra Connor every day.' And the Press Association commented: `Likely to do for art what David Attenborough did for animals.' Visit her on www.alexandraconnor.com and follow her on Twitter at @alexconnorwrite and @connorsagas and on https://www.facebook.com/alexconnorwriter/