Items related to That's Me in the Middle (The Bandy Papers Book...

That's Me in the Middle (The Bandy Papers Book 2) 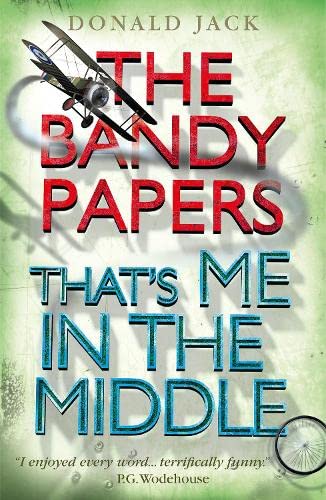 Strangely horse-faced World War I flying ace Bart Bandy finds himself kicked upstairs to everyone s appalled surprise and made a Lieutenant-Colonel in the Royal Flying Corps.

But not for long. Persuaded to give a school speech on the many shortcomings of Field Marshal Haig, Bart finds Fortune s Wheel definitely on the turn and soon he is once more heading for the hell of the trenches this time on a bicycle.

With the daredevil commander of the 13th Bicycle Brigade, Bob Craig, there follow a series of edge-of-the-seat adventures, always accompanied by what Craig later refers to fondly as brilliant exchanges of utter nonsense .

Donald Jack s blackly humorous Bandy memoirs are classics of their kind. Against an unshrinkingly depicted backdrop of war and its horrors, his anti-hero s adventures are both gripping and shockingly funny.

What people are saying about The Bandy Papers:

Reading can lead to involuntary bursts of loud laughter.

Very descriptive, full of air combats and written with a fine eye for period detail . . . there is quite simply no finer book of its kind. Highly recommended.

It is clear that Bandy likely should've been killed several times, but very likely the Grim Reaper was laughing too hard to hold his scythe straight . . .

Hysterically funny! . . . each book is another installment in the continuing saga of a Canadian and his adventures in war, the world, and women.

I have yet to find another author with the wit and humor of Donald Jack.

Jack does more than play it for laughs . . . The mingling of humor and horror is like a clown tap-dancing on a coffin, but Jack is skillful enough to get away with it. Time Magazine

Funny. Very. Donald Jack has as light a touch with this fragile art as his hero has on throttle of a Sopwith Camel. Excessive corn is avoided in favour of wit and a delight in life. New York Times

Bartholomew Bandy is the most remarkable hero (or anti-hero) since Harold Lloyd impersonated the Freshman. Chicago Tribune

To know Bandy is to love him . . . you tend to gallop through and come hurtling out at the end panting for more. The Sunday Sun

For those to whom Bandy is a newcomer, what a treat is in store. Toronto Star

"Donald Jack has as light a touch with this fragile art as his hero has on throttle of a Sopwith Camel." * New York Times * "Bartholomew Bandy is the most remarkable hero (or anti-hero) since Harold Lloyd impersonated the Freshman." * Chicago Tribune * "To know Bandy is to love him . . . you tend to gallop through and come hurtling out at the end panting for more." * The Sunday Sun * "The Bandy Papers deserve to be read in private where insane giggling can go unnoticed." -- Jack Granatstein "I enjoyed every word . . . terrifically funny." -- P.G. Wodehouse

Donald Lamont Jack was born in Radcliffe, England,on December 6, 1924. He attended Bury Grammar School in Lancashire, and later Marr College, Troon (from which he was briefly evicted after writing an injudicious letter to the editor).
From 1943 to 1947 he served in the Royal Air Force as an AC, or aircraftsman, working in radio communications. During his military service Jack was stationed in a variety of locales, though he concentrated on places beginning with the letter B : Belgium, Berlin, and Bahrain. After de-mobbing, he participated in amateur dramatics with The Ellis Players, and worked for several years in Britain, but he had by then grown weary of B -countries and decided to move on to the C s. Thus, in 1951, Jack emigrated to Canada.
In 1962 he published his first novel, Three Cheers for Me, about fictional Canadian First World War air-ace Bartholomew Wolfe Bandy. Three Cheers for Me won the Leacock Medal for Humour in 1963, but additional volumes did not appear until a decade later when a revised version of the book was published, along with a second volume, That s Me in the Middle, which won Jack a second Leacock Medal in 1974. He received a third award in 1980 for Me Bandy, You Cissie.
Jack returned to live in England in 1986, where he continued to work on additional volumes in the Bandy series. He died on June 2, 2003. His final novel, Stalin vs. Me, was first published posthumously in 2005.

1. Thats Me in the Middle (The Bandy Papers Book 2)

Book Description Farrago, 2017. Paperback. Condition: Used; Good. **Simply Brit** Shipped with Premium postal service within 24 hours from the UK with impressive delivery time. We have dispatched from our book depository; items of good condition to over ten million satisfied customers worldwide. We are committed to providing you with reliable and efficient service at all times. Seller Inventory # 2952023

Book Description Paperback. Condition: Fair. A readable copy of the book which may include some defects such as highlighting and notes. Cover and pages may be creased and show discolouration. Seller Inventory # GOR010695067

Book Description Paperback. Condition: Very Good. The book has been read, but is in excellent condition. Pages are intact and not marred by notes or highlighting. The spine remains undamaged. Seller Inventory # GOR009409555

Book Description Farrago 10/08/2017, 2017. Condition: Very Good. This book is in very good condition and will be shipped within 24 hours of ordering. The cover may have some limited signs of wear but the pages are clean, intact and the spine remains undamaged. This book has clearly been well maintained and looked after thus far. Money back guarantee if you are not satisfied. See all our books here, order more than 1 book and get discounted shipping. . Seller Inventory # 7719-9781911440468