Items related to Al-Ghazali on Love, Longing, Intimacy and Contentment:...

Al-Ghazali on Love, Longing, Intimacy and Contentment: Book XXXVI of the Revival of the Religious Sciences (The Islamic Texts Society's al-Ghazali Series) 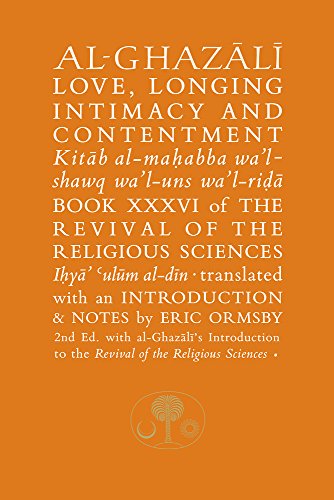 "Al-Ghazali on Love, Longing, Intimacy and Contentment" is the thirty-sixth chapter of Abu Hamid al-Ghazali's "Revival of the Religious Sciences" (Ihya Ulum al-Din), which is widely regarded as the greatest work of Muslim spirituality. "Al-Ghazali on Love, Longing, Intimacy and Contentment" is of fundamental importance in the history of Islamic thought and in the development of Sufism, being the first treatise to establish not merely the possibility but the necessity for the love of God.---In "Al-Ghazali on Love, Longing, Intimacy and Contentment", Ghazali argues that all the virtues and spiritual stages that precede love, like repentance, patience and thankfulness, lead to love; and all the spiritual stages that follow on from love are a result of it. Using proof texts from the Qur'an, the Traditions of the Prophet Muhammad and Sufi precepts, Ghazali succeeds in marshalling forceful arguments to make his case. Out of Ghazali's pioneering treatment would emerge not only new trends in Sufi theory and practice, but an entire body of mystical poetry including that of the great Persian poets Rumi and Hafiz.---Professor Eric Ormsby's fully annotated translation brings out all the beauty and lyricism of the text. The translation is preceded by an extensive introduction which sets the work in its historical and spiritual context.---In this new edition, the Islamic Texts Society has included the translation of Abu Hamid al-Ghazali's own Introduction to the "Revival of the Religious Sciences" which gives the reasons that caused him to write the work, the structure of the whole of the "Revival" and places each of the chapters in the context of the others.

...the series as a whole, [is] a significant contribution to our understanding of this key figure in Islamic intellectual thought.--Oliver Leaman "BRISMES Bulletin "

Author Information: Abu Hamid al-Ghazali (d. 505/1111), theologian, logician, jurist and mystic, was born and died in Tus in Central Asia, but spent much of his life lecturing at Baghdad or leading the life of a wandering dervish. His most celebrated work, "Revival of the Religious Sciences", has exercised a profound influence on Muslim intellectual history by exploring the mystical significance of the practices and beliefs of Islamic orthodoxy, earning him the title of "Hujjat al Islam", the `Proof of Islam'.---Translator Information: Prof Eric Ormsby was Director of the Institute of Islamic Studies at McGill University. He is at present Professor and Senior Research Assistant at the Institute of Ismaili Studies, London.