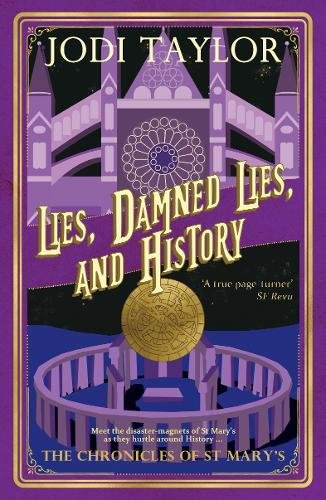 Rules are meant to be broken, aren't they? `I've done some stupid things in my time. I've been reckless. I've broken a few rules., But never before have I ruined so many lives or left such a trail of destruction behind me.'Max has never been one for rules. They tend to happen to other people. But this time she's gone too far., And everyone at St Mary's is paying the price. With the History Department disintegrating around her and grounded until the end of time, how can she ever put things right?

A carnival ride through laughter and tears with a bit of time travel thrown in for spice . . . readers will be impatient for later installments -- --Publisher's Weekly, starred review

Danger, romance, history, financial and academic politics, hidden agendas, dangerous assignments, characters you care about, and the feeling that more is going on than you're actually reading about. I can hardly wait for book two. Just One Damned Thing After Another is a true page-turner. -- --SF Revu

Taylor does a great job of setting up an appealing cast of characters in this new series opener, most especially the intrepid Max. There is plenty of humor, lots of action, and even a touch of romance. -- --Library Journal

Jodi Taylor, International Woman of Mystery, spent some time working undercover for North Yorkshire County Library Service. Heavily disguised as the world's most incompetent Facilities Manager she shifted dead dogs, fell out of mobile libraries, and spent far too much time in the gents' toilets. The idea to re-write history first came to her while studying history A' level at an evening class. Just One Damned Thing After Another is her first novel and was originally self-published on ebook where it was downloaded by more than 60,000 readers on Amazon.