Items related to What Would Keir Hardie Say? Exploring Hardie's... 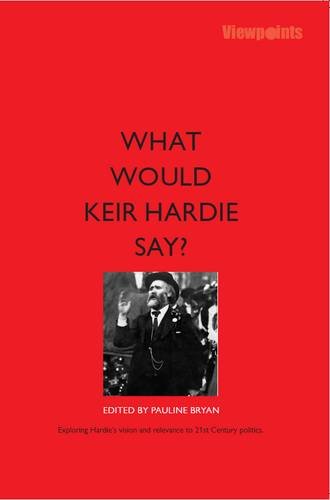 My work has consisted of trying to stir up a divine discontent with wrong. KEIR HARDIE

Has the Labour Party stayed true to Hardie's socialist ideals and vision?
What would Hardie make of the recent developments in Scottish politics?
If he were active today, what would Keir Hardie say about attacks on welfare trade union rights immigration privatisation European Union the economy?

A passionate leader who fought for justice, Keir Hardie, founder and first leader of the Labour Party, was a stringent critic of the world he saw around him. A socialist, a trade unionist and above all an agitator, he gave unstinting support to the women s suffrage movement and risked all in his commitment to anti-imperialism and international peace.

Now, 100 years after Hardie s death, editor Pauline Bryan gathers together essays from writers, trade unionists, academics and politicians to reflect on Hardie's contribution and what it means today.

What Would Keir Hardie Say? (Luath Press) is a highly readable collection of essays edited by Pauline Bryan. It's lively and fascinating, both historically, and as an exploration of Hardie's vision and relevance to politics today. --The New Internationalist

Pauline Bryan was asked by the Keir Hardie Society to produce a book of essays to commemorate Keir Hardie. She is well placed to do this as she was a member of the Independent Labour Party and the Labour Party and previously worked for the Fabian Society. She jointly edited Class, Nation and Socialism: The Red Paper on Scotland 2014 and contributed to The Red Paper on Scotland 2005, Scotland's Road to Socialism: Time to Choose 2013 and A Modest Proposal: For the Agreement of the People. For 8 years she edited The Citizen magazine for the Scottish Labour Campaign for Socialism.

Book Description LUATH PRESS LTD, United Kingdom, 2016. Paperback. Condition: New. Language: English. Brand new Book. Keir Hardie is a significant figure in British history. He is known as the founder of the Labour Party but his influence went much wider. 100 years after his death the question is still often asked, "What would Keir Hardie say?"A group of distinguished writers have come together to write about different aspects of Hardie's life and legacy: Fran Abrams, Melissa Benn, Jeremy Corbyn, John Callow, Bob Holman, Cathy Jamieson, William Knox, Richard Leonard, Owen Smith, Dave Watson, Barry Winter. Each of them tackles one aspect of Hardie's varied interests from his support for women's suffrage, his internationalism, to his central role in the foundation of the Labour Party. Each essay considers the relevance of Keir Hardie's work to our lives today.The Foreword by Keir Hardie's great granddaughter, Dolores May Arias, reminds us that as well as his huge public presence, Hardie was a family man. And like so many great figures in history his family paid a price. Seller Inventory # ABS9781910745151

2. What Would Keir Hardie Say?

3. What Would Keir Hardie Say?

5. What Would Keir Hardie Say?