Items related to How's Your Dad? 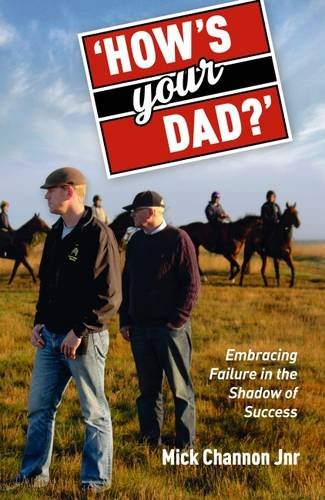 Longlisted for the William Hill Sports Book of the Year Award 2016.

Framed within the tribulations of a turbulent year in a racing yard, How's Your Dad? examines the relationship between a father and son. The father, Michael Channon Snr, an arthritic workaholic and "a grumpy old bastard", played football at the highest level for over twenty years, scoring crucial goals for the likes of Southampton, Norwich City and most famously, England. Almost uniquely, he followed up this sporting career with another, ultimately scaling the heights of the Racing game. With such an illustrious Father, Michael Channon Jnr had plenty to live up to and though he enjoyed the many benefits of such a connection he felt that pressure, as well as the relative anonymity of always being "Mick's son".

Vividly and often humorously told, this story is balanced with deeply atmospheric, sometimes darkly dramatic, flashbacks to a youth often misspent. As a small boy Michael Junior is led out on to the pitch at Wembley on Cup Final Day, as a student he finds himself in intensive care after succumbing to his drunken state and the dangers of sleeping on the roof. His promising career as a TV producer is hampered by an untimely fire in the workplace as well as a loss of direction, a direction that once found leads back to where he began, at his Father's side. Rigidly old fashioned and phenomenally short tempered, Michael Senior fosters a love/hate relationship, but in caring for his father in the aftermath of a horrendous car crash Michael Junior poignantly uncovers the hidden feelings every son has for their Dad.

Brilliant read. Scarily honest and so funny. Everyone in racing should get a copy. - Matthew Tester, Senior Handicapper BHA

Expletives lace the paragraphs but so do laughs and the occasional wince. - Marcus Townend --Daily Mail

While Mick Channon Jnr may have embraced failure, it would appear that, in penning How's Your Dad? he has stumbled upon something he might be exceptional at: writing. - Marcus Armytage

Mick Jnr is a very good, unconstructed writer. He is a natural storyteller... It is certainly a read for sports fans. - Charlie Brooks --The Telegraph

If you buy only one racing themed book this year, this should be it. --The Racing Forum

MICHAEL JOHN CHANNON has achieved many failures in his life. A dismal career as a TV sports reporter followed an even worse attempt at becoming a footballer and along the way he has collected a catalogue of disasters, ranging from setting fire to his place of work to hitting a crossbar from three yards against Bognor Regis. They, coupled with an often taut relationship with his dad in horse racing, have led to his finest book yet. This is his first book.