Parkinson, Siobhán Rocking the System: Fearless and Amazing Irish Women Who Made History

Rocking the System: Fearless and Amazing Irish Women Who Made History 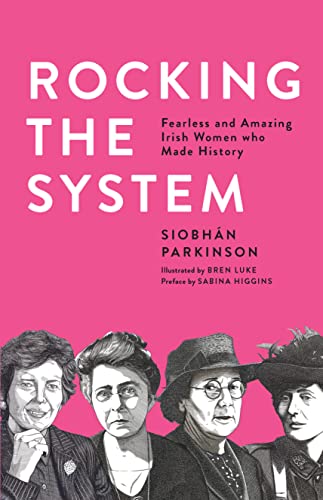 Twenty illustrated essays on Irish women, historical and contemporary, who have defied cultural norms around femininity and achieved great things. The subjects include Irish women from Queen Medb to Eileen Gray, from Constance Markievicz to Sonia O'Sullivan, covering stateswomen, artists, writers, activists and rebels of all kinds. Written by multi award-winning author and first Laureate na nOg (Irish Children's Laureate), Siobhan Parkinson. Perfect for use in schools as well as for leisure reading, this collection celebrates the role of women in Ireland's changing society.

"Many battles have been won by these brave women and the unknown heroines who walked quietly alongside them. This book will inspire all its readers to play their part in creating a world that is fair, harmonious and equal." --Sabina Higgins, political activist and First Lady of Ireland

"Rocking the System is historically accurate without feeling overly educational. Each profile features a gorgeous portrait illustration by Bren Luke, which I liked in particular as the style reminded me of the images that previously appeared on old punt notes . . . The most crucial thing about Rocking the System is however, the books ability to shine the light on women who have been, for one reason or another, edited out of the larger story of Ireland's history. This book goes out of its way to show us HERSTORY . . . Books like Rocking the System are so crucial; they pay homage to those who have gone before and prepare a new generation of women who will no doubt keep rocking that system for years to come." --Ruth Concannon, Dublin City Libraries Reader in Residence

Siobhan Parkinson is one of Ireland's best-known writers for children. She has written almost thirty books, most of them for children and teenagers, for which she has won a bagful of awards and nominations, and her books have been translated into about twenty languages. She was Ireland's first Children's Laureate in 2010.

1. Rocking the System: Fearless and Amazing Irish Women who Made History (Hardback)

4. Rocking the System: Fearless and Amazing Irish Women who Made History (Hardback)

5. Rocking the System : Fearless and Amazing Irish Women Who Made History

Book Description Hardcover. Condition: New. Hardcover. These 20 illustrated essays are on Irish women, historical and contemporary, who have defied cultural norms around femininity and achieved great things. The subjects include Irish women fr.Shipping may be from multiple locations in the US or from the UK, depending on stock availability. 208 pages. 0.456. Seller Inventory # 9781910411964

10. Rocking the System : Fearless and Amazing Irish Women Who Made History