Soviet General Staff The Battle of Moscow 1941–1942: The Red Army’s Defensive Operations and Counter-offensive Along the Moscow Strategic Direction

The Battle of Moscow 1941–1942: The Red Army’s Defensive Operations and Counter-offensive Along the Moscow Strategic Direction 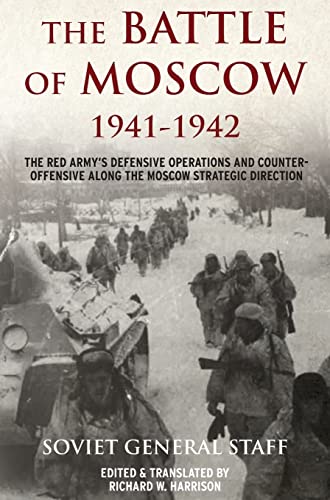 The Battle of Moscow, 1941 - 1942: The Red Army's Defensive Operations and Counteroffensive Along the Moscow Strategic Direction" is a detailed examination of one of the major turning points of World War II, as seen from the Soviet side. The Battle of Moscow marked the climax of Hitler's "Operation Barbarossa," which sought to destroy the Soviet Union in a single campaign and ensure German hegemony in Europe. The failure to do so condemned Germany to a prolonged war it could not win. This work orignally appeared in 1943, under the title "Razgrom Nemetskikh Voisk pod Moskvoi" (The Rout of the German Forces Around Moscow). The work was produced by the Red Army General Staff's military-historical section, which was charged with collecting and analyzing the war's experience and disseminating it to the army's higher echelons. This was a collective effort, featuring many different contributors, with Marshal Boris Mikhailovich Shaposhnikov, former chief of the Red Army General Staff and then head of the General Staff Academy, serving as general editor. The book is divided into three parts, each dealing with a specific phase of the battle. The first traces the Western Front's defensive operations along the Moscow direction during Army Group Center's final push toward the capital in November - December, 1941. The study pays particular attention to the Red Army's resistance to the Germans' attempts to outflank Moscow from the north. Equally important were the defensive operations to the south of Moscow, where the Germans sought to push forward their other encircling flank. The second part deals with the first phase of the Red Army's counteroffensive, which was aimed at pushing back the German pincers and removing the immediate threat to Moscow. Here the Soviets were able to throw the Germans back and flatten both salients, particularly in the south, where they were able to make deep inroads into the enemy front to the west and northwest. The final section examines the further development of the counteroffensive until the end of January 1942. This section highlights the Soviet advance all along the front and their determined but unsuccessful attempts to cut off the Germans' Rzhev - Vyaz'ma salient. It is from this point that the front essentially stabilized, after which events shifted to the south. This new translation into English makes available to a wider readership this valuable study. Contains 55 maps.

Of considerable value to a wide audience ... this translated study should prove to be a very useful addition to the literature. --Russian Review

Richard W. Harrison earned his undergraduate and master's degrees from Georgetown University, where he specialized in Russian area studies. He later earned his doctorate in War Studies from King's College London. Harrison has worked for the US Department of Defense as an investigator in Russia, dealing with cases involving POWs and MIAs. He has also taught Russian history and military history at the college and university level, most recently at the US Military Academy at West Point. Harrison is the author of two books dealing with the Red Army's theoretical development during the interwar period.

THE BATTLE OF MOSCOW 1941-1942: THE RED ARMY'S DEFENSIVE OPERATIONS AND COUNTER-OFFENSIVE ALONG THE MOSCOW STRATEGIC DIRECTION HBK

THE BATTLE OF MOSCOW 1941-1942 : THE RED ARMY'S DEFENSIVE OPERATIONS AND COUNTER-OFFENSIVE ALONG THE MOSCOW STRAEGIC DIRECTION

The Battle of Moscow 1941?1942: The Red Army?s Defensive Operations and Counter-offensive Along the Moscow Strategic Direction

The Battle of Moscow 1941?1942: The Red Army?s Defensive Operations and Counter-offensive Along the