Items related to Observers and Navigators: And Other Non-pilot Aircrew...

C. G. Jefford Observers and Navigators: And Other Non-pilot Aircrew in the RFC, RNAS and RAF

Observers and Navigators: And Other Non-pilot Aircrew in the RFC, RNAS and RAF 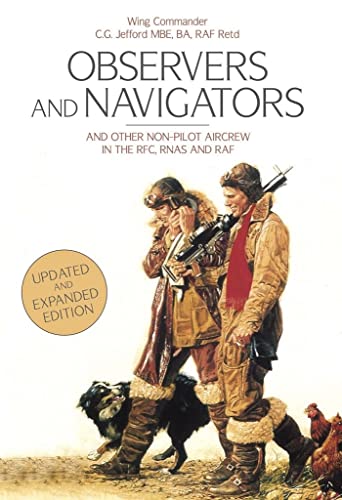 This title first appeared in 2001 to universal acclaim, quickly went out of print and has remained so since. The author, meantime, has continued his research and the result is this updated edition, over half as long as the first, with stacks of new photographs. Absolutely essential reference for all those interested in military aviation.

This classic volume has now been substantially upgraded and expanded in a lavish second edition. The story that unfolds is a truly fascinating one and the author's diligence has resulted in a worthy and readable account that even now has received comparatively scant attention from aviation writers. Jeff Jefford has produced an outstandig work and the reviewer has little hesititation in recommending it. --Windsock International

Anything Jeff Jeffords writes is meticulously researched and presented in a clear, easy to follow manner. This is a revision of the 2001 original, with new material bringing it right up to date. The book is printed on very good quality paper and contains numerous well-copied photographs and clear tabulations. If you have the first edition, it is well worth replacing with this. --Cross & Cockade International

With 400 pages (and numerous footnotes) this is not a book that can be skimmed through but it is a vital one for those wishing to get behind the organisation of the RAF over the years and its social background. --Air-Britain Aeromilitaria

The book contains an immense amount of information and is meticulously referenced and will be of great interest to anyone who has served or is still serving as aircrew. --Prop-Swing Journal

First published by Airlife in 2001 and selected as Aeroplane's Book of the Month in March 2002, this volume was enthusiastically reviewed and became an excellent source of information in this office. This new version, expanded and updated is 50 per cent larger than its predecessor. Plenty of interesting illustrations inlcuding one showing synthetic training rigs created from redundant airframes, noses of Lancasters, a Catalina, Liberator, Sunderland and a pair of Stirlings at St Athan. If you bought the first edition and found it interesting, you might sell it and invest in this new one which we continue to recommend. --Aeroplane Monthly

Book of the Month --Aeroplane Monthly

If you like well-written unit histories, or aviation personal-ity biographies built out from a solid research base, then this book is for you. Technophiles will be similarly pleased. --Canadian Aviation Historical Society Journal

This is a highly detailed encyclopaedic study of non-pilot aircrew from the very beginning of aviation right up to the present time. It's packed with photographs and comprehensive references. The author has clearly gone to great lengths in his research to present the facts in much detail. Congratulations to the author on creating a most informative read and for chronicling the evolution of the Navigator/Observer. --The Pennant

This book tells the important story of the guys in back. For years World War I aviation history researchers have focused on single-seat fighter aces whose exploits brought medals, fame, and perks never known by men in the trenches and by flying men whose work did not bring the same opportunity for victory. Wing Commander Jefford has gone to considerable lengths to correct that historical oversight. We need to spend more time researching the contribution that backseat crewmen made to the first air war. This book is a good start. Highly recommended --Over the Front

There are very few 400-page studies which are written with an exceptionally readable fluency; there are even fewer which become must buy works of reference. Jeff Jefford s Observers and Navigators achieves both those accolades, a result of Jeff s erudition and sound research carried out over many years, of his ability to distil his subject into pithy chapters of an average nine easy-to-read pages, and of his wickedly incisive observations on the institutional RAF class structure between pilot (sometimes referred to by others, but not by Jeff, as the two-winged Master Race ) and all other aircrew of whatever --Defence Electronic History Society

A simple addendum to the 2001 Edition would have been a worthy addition to public knowledge. However, the author has used the opportunity to considerably expand and refine the book.

Jefford's book is extraordinarily detailed and constitutes a fitting tribute to the various non-pilot aircrew specialties that developed in the Royal Air Force. The book is richly illustrated, extremely detailed, and replete with references making it more than just a homage. Air Power History

'Jeff' Jefford joined the RAF in 1959. His flying experience included tours on Canberras with No 45 Squadron in Singapore, on Vulcans with Nos 83 and 50 Squadrons and as an air navigation instructor with No 6 FTS. His ground tours included administrative posts at Manby and Gatow (Berlin) and air staff duties at HQs Strike and Support Commands. He left the RAF to read history at London University (Royal Holloway), graduating with First Class Honours in 1994. Since then he has been a member of the Executive Committee of the RAF Historical Society and has been its editor since 2000. He has had a number of articles published under the Society s own imprint and in the prestigious Cross & Cockade Journal; he has three books to his credit.

Observers and Navigators: And Other Non-Pilot Aircrew in the RFC, RNAS and RAF Hardcover

Book Description Hardback. Condition: New. Language: English. Brand new Book. First published in 2001 to universal acclaim Observers and Navigators is an absolute essential reference guide for all those interested in military aviation. Now in 2014, C.G. Jefford has brought years of continued research into a new updated and expanded edition. This book begins with a detailed examination of the previously little understood observers, aerial gunners/gunlayers and kite balloon observers who flew with the RFC, RNAS and latterly the RAF between 1914 and 1919. It goes on to examine the proliferation of non-pilot aircrew categories until 1942 when the observer was supplanted by the air bomber and a variety of specialised types of navigator. Having provided an overview of wartime aircrew training, the story continues with a consideration of the ill-conceived 1946 Aircrew Scheme which had to be abandoned in 1950 in favour of an all-officer policy for pilots and navigators. The author examines the way in which this egalitarian policy has actually been implemented while continuing to trace the rises and falls in the fortunes of all non-pilot aircrew categories and the evolution of post-war aircrew training until the last navigators graduated in 2011. He concludes by posing several questions to which he suggests some answers. Seller Inventory # BZE9781909808027

Observers and Navigators: And Other Non-Pilot Aircrew in the RFC, RNAS and RAF

Observers and Navigators: And Other Non-Pilot Aircrew in the RFC, RNAS and RAF