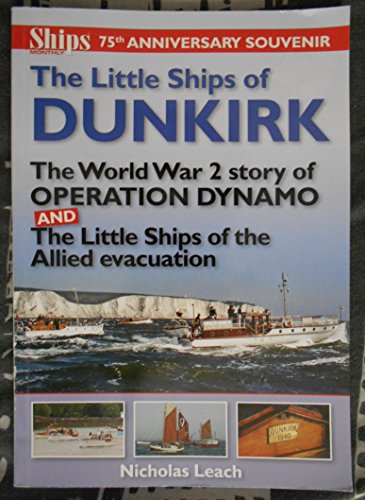 Operation Dynamo, the evacuation of the British Expeditionary Force from Dunkirk, began on 26 May and ended on 3 June 1940. Disaster or triumph? Victory or defeat? Whatever assessment is made of the evacuation, it has become a part of the national consciousness, with the 'Little Ships' elevated to the status of heroes for the role they played in helping to save the BEF soldiers. This book provides short histories of more than seventy of the famous craft that crossed the Channel to save Allied soldiers from the German advance, and which now form the backbone of the Association of Dunkirk Little Ships, the organisation that keeps the memories of 1940 alive. Many are elegant motor yachts, with classic lines, while others are preserved lifeboats that were built to save lives. There are also barges, passenger launches, motor torpedo boats and many other craft, all of which are lovingly cared for by owners who spend much time and money preserving these historic vessels. Author Nicholas Leach has worked in conjunction with the Association of Dunkirk Little Ships to provide this souvenir guide to the Little Ships, most of which involved in the 75th anniversary return crossing in May 2015. In full colour, the book also provides an overview of Operation Dynamo and how the Association's formation came about in the 1960s. Nicholas Leach

Book Description Paperback. Condition: Good. The book has been read but remains in clean condition. All pages are intact and the cover is intact. Some minor wear to the spine. Seller Inventory # GOR007178774

Book Description Paperback. Condition: Very Good. The book has been read, but is in excellent condition. Pages are intact and not marred by notes or highlighting. The spine remains undamaged. Seller Inventory # GOR007036658

Book Description Foxglove Publishing Ltd, 2015. Paperback. Condition: Good. Good condition is defined as: a copy that has been read but remains in clean condition. All of the pages are intact and the cover is intact and the spine may show signs of wear. The book may have minor markings which are not specifically mentioned. Most items will be dispatched the same or the next working day. Seller Inventory # wbb0012523070

Book Description Foxglove Publishing Ltd, 2015. Paperback. Condition: Very Good. Very Good: a copy that has been read, but is in excellent condition. Pages are intact and not marred by notes or highlighting. The spine remains undamaged. Most items will be dispatched the same or the next working day. Seller Inventory # wbb0015697241

5. The Little Ships of Dunkirk the World War 2 Story of Operation Dynamo

Book Description Foxglove Publishing Ltd, 2015. Paperback. Condition: Good. Bottom corner of spine/front cover bumped with slight scuffing - otherwise Very Good. Internally Very Good - clean and tidy copy in tight binding. ** 350g ** All orders are sent with a tracking /signature service for your peace of mind, so that you can keep tabs on your parcel. For overseas customers - on some sites we use, parcels weighing over the standard rate may incur an additional charge and we will then contact you with the additional shipping fee required. This is for the postage only we do not charge you for our time or our excellent packaging, which we are noted for. Dispatched in cardboard mailers within 24/48 Hours Mon - Friday 2pm, except bank holidays, otherwise next business day - excellent service guaranteed. ; 96 pages. Seller Inventory # 6537