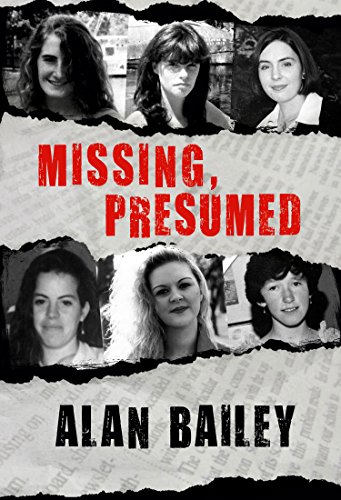 Between 1993 and 1998, six Irish women disappeared. The area in which these disappearances occurred soon became known to the media as &quotThe Vanishing Triangle". To date, none of the missing women have ever been located. Missing, Presumed tells the story of the murders and subsequent hunt for a killer.

Book Description Condition: Good. May contain highlighting, handwriting or underlining through out the book. Book may show some wear. Used books may not contain supplements such as access codes, CDs, etc. Every item ships the same or next business day with tracking number emailed to you. Seller Inventory # 3U1COE000KFM

Book Description Liberties Press Ltd, 2014. Paperback. Condition: Very Good. Very Good: a copy that has been read, but is in excellent condition. Pages are intact and not marred by notes or highlighting. The spine remains undamaged. Most items will be dispatched the same or the next working day. Seller Inventory # wbb0015499350

Book Description Liberties Press, 2015. Paperback. Condition: GOOD. Has little wear to the cover and pages. Contains some markings such as highlighting and writing. Seller Inventory # 1909718858_abe_gd

Book Description Liberties Press, 2015. Condition: Good. A+ Customer service! Satisfaction Guaranteed! Book is in Used-Good condition. Pages and cover are clean and intact. Used items may not include supplementary materials such as CDs or access codes. May show signs of minor shelf wear and contain limited notes and highlighting. Seller Inventory # 1909718858-2-4