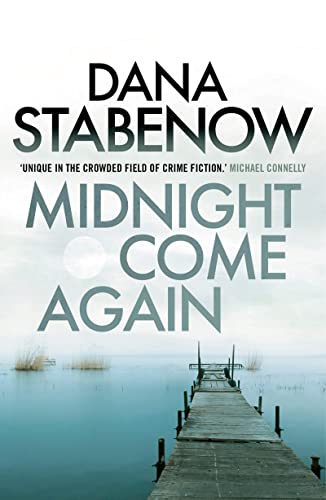 KATE SHUGAK is a native Aleut working as a private investigator in Alaska. She's 5 foot 1 inch tall, carries a scar that runs from ear to ear across her throat and owns half-wolf, half-husky dog named Mutt. Resourceful, strong-willed, defiant, Kate is tougher than your average heroine – and she needs to be to survive the worst the Alaskan wilds can throw at her.

MIDNIGHT COME AGAIN. Kate Shugak is hiding out in Bering, Alaska. Scarred, scared, and pretending to be someone else... But Alaska State Trooper Jim Chopin, Kate's best friend, needs her to help him work a new case. He discovers her hiding out in Bering, a small fishing village on Alaska's western coast, living and working under an assumed name – working hard, as 18-hour workdays seem to be her only justification for getting up in the morning. But before they can even discuss Kate's last several months, or what Jim is doing looking for her in Bering, they're up to their eyes in Jim's case, which is suddenly more complicated – and more dangerous – than they suspect.

'A darkly compelling view of life in the Alaskan bush, well laced with lots of gallows humor. Her characters are very believable, the story lines are always suspenseful, and every now and then she lets a truly vile villain be eaten by a grizzley. Who could ask for more?' Sharon Penman.

'Stabenow is blessed with a rich prose style and a fine eye for detail. An outstanding series' Washington Post.

'One of the strongest voices in crime fiction' Seattle Times.

In 1991 Dana Stabenow, born in Alaska and raised on a 75-foot fishing trawler, was offered a three-book deal for the first of her Kate Shugak mysteries. In 1992, the first in the series, A Cold Day for Murder, received an Edgar Award.

Book Description Head of Zeus. Condition: New. Alaskan investigator Kate Shugak is in trouble and trying to stay hidden. But her best friend needs her help solve a case, one that turns out to be more dangerous than either of them assumed. Series: A Kate Shugak Investigation. Num Pages: 336 pages. BIC Classification: FF. Category: (G) General (US: Trade). Dimension: 198 x 133 x 21. Weight in Grams: 238. . 1822. Paperback. . . . . Books ship from the US and Ireland. Seller Inventory # V9781908800718