Items related to You Aren't What You Eat: Fed Up with Gastroculture

Poole, Steven You Aren't What You Eat: Fed Up with Gastroculture

You Aren't What You Eat: Fed Up with Gastroculture 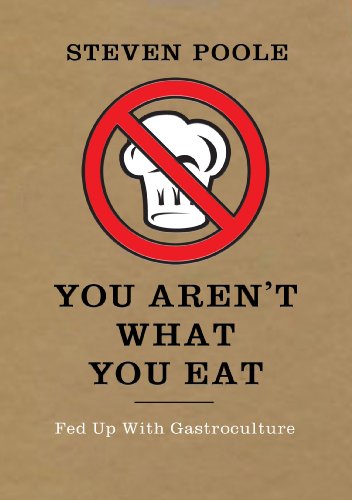 We have become obsessed by food: where it comes from, where to buy it, how to cook it and most absurdly of all how to eat it. Our televisions and newspapers are filled with celebrity chefs, latter-day priests whose authority and ambition range from the small scale (what we should have for supper) to large-scale public schemes designed to improve our communal eating habits. When did the basic human imperative to feed ourselves mutate into such a multitude of anxieties about provenance, ethics, health, lifestyle and class status? And since when did the likes of Jamie Oliver and Nigella Lawson gain the power to transform our kitchens and dining tables into places where we expect to be spiritually sustained? In this subtle and erudite polemic, Steven Poole argues that we're trying to fill more than just our bellies when we pick up our knives and forks, and that we might be a lot happier if we realised that sometimes we should throw away the colour supplements and open a tin of beans.

The more this book on gastronomy lays into its practitioners, the better it gets. He is brilliantly and consistently and winningly funny.

Steven Poole puts the eating disorders of gastroculture through the food processor of his wit and chops it into meaty little bits.

'Poole is very entertaining as he mocks all manifestations of foodism, from obscure ingredient-raves to gastroporn and the chefs who take it all too seriously in Poole s phrase, bunny-broilers getting a Christ complex.'

'An overdue and well-directed acid-tipped dart at the modern obsession with food.'

'Stephen Poole's You Aren't What You Eat rips into all aspects of foodie culture gleefully, eruditely and, as far as I can see, irrefutably. If there's any justice, it should put an immediate end to all those incomprehensible menus, absurd claims about the 'art' of cooking, and to chips inexplicably served in beakers.'

A feisty and inflammatory little book, and well worth thinking about in the event that your gift-giving ritual lacks either of those qualities.

His eye for the absurd and the hypocritical is sharper than a flashing Sabatier. Making mincemeat of celebrity chefs and food historians, Poole s pungent satire becomes more serious when he takes on the political implications of organic food or ready meals. To steal a line from Masterchef, writing about cooking doesn t get tougher, or funnier, than this.

STEVEN POOLE is the author of Trigger Happy (2000) and Unspeak (2006), a book about contemporary political language. He writes about books, music and other cultural matters for the Guardian, the New Statesman and the Times Literary Supplement and has appeared at the Sydney Writers Festival, the Bath and Edinburgh Literary Festivals, the Rotterdam Film Festival and GameHotel, as well as on BBC television, BBC radio, NPR and ABC radio. He lives in London.

1. You Aren't What You Eat : Fed Up with Gastroculture

2. You Aren't What You Eat: Fed Up with Gastroculture