Items related to Insurrection: The War Against the Judges Has Begun...

Dan Abnett; Colin MacNeil Insurrection: The War Against the Judges Has Begun (Insurrection, 1) 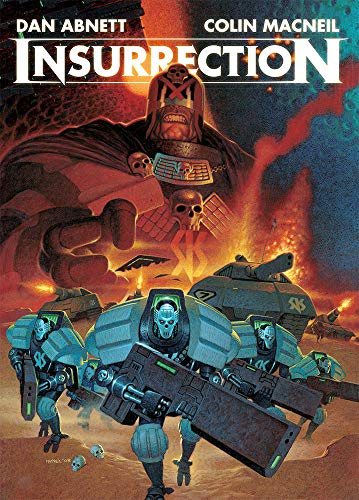 Mega-City One mining colony K-Alpha 61 has declared independence from the 'Big meg' and renamed itself Liberty. This act of defiance has angered the Justice Department's Special Judicial Squad and in a bid to stop further colonies from rebelling, war is inevitable...Set in the Judge Dredd universe, this high-octane space adventure is written by bestselling Warhammer author, Dan Abnett (Horus Rising, Legion, Prospero Burns) with art by 2000 AD stalwart Colin MacNeil (Chopper, Strontium Dog, Fiends of the Eastern Front).

Dan Abnett is the co-creator of 2000 AD series Atavar, Badlands, Sancho Panzer and Sinister Dexter. He has also written Black Light, Downlode Tales, Durham Red, Flesh, Future Shocks, Judge Dredd, Pulp Sci-Fi, Roadkill, Rogue Trooper, The VCs, Vector 13 and Venus Bluegenes, as well as The Scarlet Apocrypha and Wardog for the Megazine. A prolific creator, Abnett has also written for Marvel, Dark Horse and DC Comics. He is the author of twenty novels for the Black Library, including the bestselling Gaunt's Ghosts series. His most recent work outside the Galaxy's Greatest Comic is DC's Legion and Superman, and Wildstorm's Mr Majestic. Dan Abnett was voted Best Writer at the 2003 National Comic Awards.

Insurrection: The War Against the Judges Has Begun: 1

Insurrection: The War Against the Judges Has Begun (Paperback)